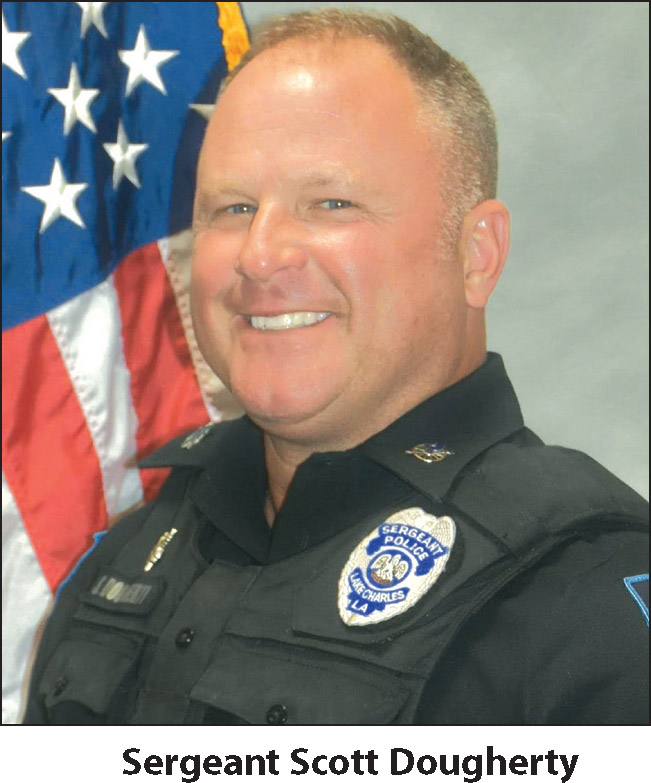 Police Chief Shawn Caldwell presented Dougherty with his award, saying that Dougherty’s actions and professional standards have set the bar for the rest of the department to aim for.

“The high level of standards he sets while working in his various areas of assignment make him a valuable asset to not only the department, but the community as a whole. He routinely goes above and beyond the call of duty and has numerous certifications for training other officers,” Caldwell stated.

Dougherty began working for the Lake Charles Police Department in 2009 in the Patrol Division after moving over from another local agency. Before that, he served in the United States Marine Corps, which he said set him up for a desire to continue in a role where he could serve and protect others.

“I guess I feel it was a natural progression as a career move after my service in the US Marine Corps. The uniform, similar structure and duties. I’ve always felt like it was a calling for me so there was never really any other avenues I was seeking at the time,” Dougherty stated.

In 2013, Dougherty was moved to the traffic division where he routinely assists with planning logistics and operations for large events such as Presidential escorts and escorts for officers killed in the line of duty. Caldwell said Dougherty has also become known as the “Mardi Gras guru” within the department.

When the department experienced the unexpected loss of former Chief Don Dixon on Christmas Day last year, Caldwell said it was Dougherty who stepped in to coordinate with multiple agencies to organize the funeral escorts.

“His professionalism and dedication to the task at hand are qualities anyone working with Sgt. Dougherty respects him for, and the leadership he displays every day is something we all look towards,” Caldwell stated.

That desire to help and be of service to others is exactly what Dougherty said continues to motivate him in his work.

“Police work is not a job you enter looking for a reward, it’s more of a calling for service. One of the most rewarding parts of the job is being able to go out every day and just try to be there for all those who need assistance; to help those who need it and things like that. Overall, I think that we have a great relationship with our community here in Lake Charles and I like to do my best to be a part of that,” Dougherty stated.

Allen schools will have resource officers in upcoming school…