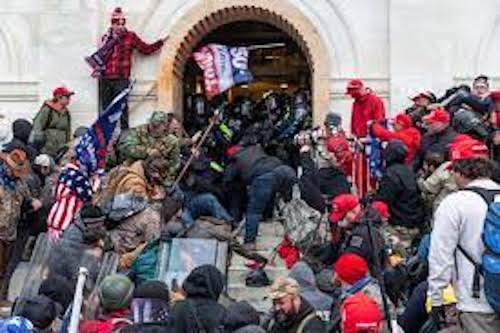 The Jan. 6, 2021, insurrection at the U.S. Capitol needs to be a part of this nation's history since it was the first major attempt to try and change the outcome of a presidential election.washingtonpost.com

Invading British troops during the War of 1812 on Aug. 24, 1814, marched into Washington and set fire to the U.S. Capitol, the president’s mansion, and other local landmarks. The ensuing fire reduced all but one of the capital city’s major public buildings to smoking rubble and only a torrential rainstorm saved the Capitol from complete destruction.

That is an important part of this country’s history as recorded by the Senate Historical Office. So is the Jan. 6, 2021, riot at the U.S. Capitol that was vividly televised during the first public hearing by the House panel investigating the attack.

The attackers were brutal and one of the Capitol police officers on the scene said, “It was carnage; it was chaos.” She told the panel she slipped in other people’s blood as rioters pushed past her into the Capitol. She suffered brain injuries.

The Associated Press is probably right when it said the public hearings may not change hearts or minds in politically polarized America. It added, “But the committee’s investigation with 1,000 interviews is intended to stand as a public record for history.”

One of the more disturbing parts of this American tragedy is the fact that some of Louisiana’s members of Congress are among those who are doing their dead-level best to try and put this blemish on American history in the trash bin to be forgotten forever.

None of their comments are original. Conservative columnists are using the same tactics. They are talking about problems created by President Joe Biden or which have occurred during his administration, hoping the riot will fade from our memories.

Biden is the president and there are some serious issues facing this country. Gasoline costs are climbing faster than ever. Inflation is higher than we have experienced in many years.

We have a baby formula shortage. Our southern border is being overrun by record numbers of immigrants. Those entering the U.S. are being sent to other parts of the country because we don’t have enough places to keep them.

Here is how our own Republican members of Congress are using those issues, according to The Advocate:

U.S. Rep. Clay Higgins, who represents this area, called the hearings “another absurd act of political theater from Pelosi and the Democrats … This sham hearing will not do anything to address the real problems facing our country… record-high inflation, unaffordable gas prices, and the disintegration of our southern border. We’re losing our country and Democrats are still stuck on their hatred for President Trump.”

U.S. Rep. Mike Johnson said Democrats want to “change the narrative concerning the disastrous results of their 17 months of unilateral control of Washington. However, no amount of Hollywood-style production is going to distract the American people from the real issues that are causing them so much pain: record inflation, soaring gas prices, constant crime in our cities, uninhibited illegal immigration, and a crisis in every area of public policy touched by the Democrats.”

U.S. Sen. John Kennedy said the hearing would become a highly rated TV program. “I’m sure they’re going to make it look like CSI Miami so that the ratings will be high,” he said.

Kennedy did say, “I’m not saying that what happened on Jan. 6 was not repugnant. It was. If you look up the word ‘repugnant’ in the dictionary, there’s a picture of Jan. 6.”

U.S. Rep. Troy Carter, D-New Orleans, was the exception. That won’t surprise anyone, but what he said about why these hearings are important is worth repeating.

“People died that day. Our democracy was defiled,” Carter said. “The institution of our democracy was challenged in the worst possible way. It was violated. Republican, Democrat, Black or White, we should all be upset about it.”

As a student of history and a former teacher of American history, I believe the Jan. 6 riot deserves its place in our country’s history. President Franklin D. Roosevelt called the Dec. 7, 1941, surprise Japanese attack on Pearl Harbor “a day of infamy” and Jan. 6 is another. It has become the first determined and bloody effort to change the results of a presidential election.

Are we going to learn anything from this unprecedented assault on the Capitol of the world’s greatest democracy? We can if we recognize it for what it was — an extremely unwelcome insurrection and uncivilized attack on Jan. 6, 2021.