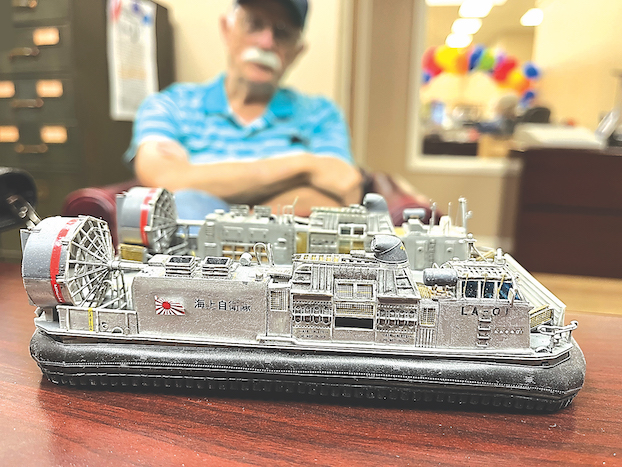 Robert Leishman, president of the Southwest Area Modelers of Plastic, with a replica of a modern-day L-CAT — the amphibious landing craft the military uses for shore-to-shore operations. This piece took him nearly 40-50 hours to complete. (Crystal Stevenson / American Press)

At Robert Leishman’s home, the man cave is actually considered a “model” cave.

“I started building models as a kid, got out of it for a bit, but then when my youngest son started showing an interest, I got back into it,” Leishman said. “He was about 10 or 11 years old at the time and we got hooked up with a local club here and we’ve been doing it ever since.”

Now president of the Southwest Area Modelers of Plastic, Leishman keeps a room in his home dedicated to his beloved creations.

“It’s a small room, but I have about 50 models in there,” Leishman said.

Leishman said a replica of a modern-day L-CAT — the amphibious landing craft the military uses for shore-to-shore operations — has been his most complex build so far, taking nearly 40-50 hours to complete.

He likes to spend his time these days working on sci-fi replicas from the “Star Wars” and “Star Trek” series.

Lester Robertson, the club’s secretary, said model building was a popular pastime for young men in the 1950s and ’60s.

“We didn’t have computer games and things like that so it was something a lot of my friends enjoyed,” Robertson said. “It also coincided with my fascination with history and the two have grown together.”

Robertson said model building can be a lot of trial and error initially.

Robertson said he would encourage those just starting out to pick a fairly simple kit, follow the directions, have fun and don’t be afraid to ask for help.

“And don’t forget YouTube,” he said. “They have a lot of videos to show you how to do it.”

Leishman said the club is hosting its 35th Plastic Model Show and Contest this weekend with about 400-500 models on display.

“We like to refer to our show as history in miniature,” Robertson said.

“If you’ve got a model you’re looking for, this is a good place to come and find it,” Leishman said.

This year’s theme is based on the song “Paint It Black” by The Rolling Stones.

“We’re asking each model displayed to be predominately painted black,” Robertson said. “It could be a black Corvette or a knight in black armor or a World War II night fighter, anything black.”

Robertson said more about the club will be available at the show, too.