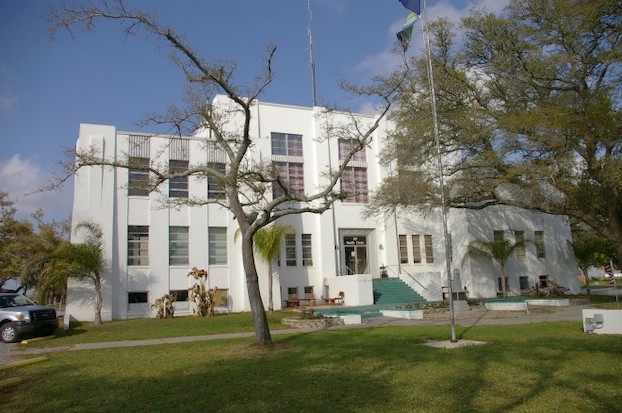 CAMERON — Members of the Louisiana Bucket Brigade on Tuesday questioned the need for several proposed liquefied natural gas export terminals and said it could raise the risk for an area already prone to major hurricanes.

The event was part of a media tour for the nonprofit, which pushes against continued expansion by the petrochemical industry. Stops were made in front of the Cameron Parish Courthouse, at a parking lot for Venture Global’s Calcasieu Pass LNG workers and the old “Pogey Plant” near Calcasieu Pass LNG and the proposed CP2 LNG terminal. The final stop was at John Allaire’s property, which is less than 1,000 feet from the proposed Commonwealth LNG site.

The tour took place one year after the historic flood in Lake Charles that left drivers stranded throughout the city and pushed inches of water into area homes and businesses. James Hiatt,  Louisiana Bucket Brigade’s Southwest Louisiana Coordinator, said he understands the need to produce jobs for hurricane-battered Cameron Parish and Southwest Louisiana. Still, he argued for a transition into more renewable energy sources.

“Obviously, we want electricity when we turn it on, but we’ve got to find a way to do that without continuing to contribute to global warming we’re experiencing,” Hiatt said. “You can see the effects of climate change in this area. There is no solution in doubling down on the same exact thing that’s causing more greenhouse gases.”

Justin Kray, a cartographer, said building these plants in such a vulnerable area and making alterations to the land will have negative impacts against future natural disasters.

“It is eating into the Chenier Plain and the sandbars that are the natural protection against hurricanes,” he said.

Kray showed aerial photographs of the Calcasieu Pass LNG site from 2019 and 2021. A road that accessed the Cameron Jetty fishing pier, a popular boat launch and public park, was removed during the build out.

Building protective structures at LNG plants, like the coffer dam levee around the Calcasieu Pass LNG site, would protect the facilities but leave outside areas at risk of flooding from a storm surge, Kray said. He shared an Aug. 30, 2020, letter from Kiewit —  the contractor for the Calcasieu Pass LNG project — to the Louisiana Department of Environmental Quality. It stated that the storm surge wall and levee protected the facility, but “several ancillary facilities” outside the wall “appear to have been impacted” by Hurricane Laura.

“They actually recognize the facility is creating a winners and losers flood state,” he said. “That would be more true if these other facilities were being constructed.”

“All you have to do is look around,” she said. “Does this look like a thriving place?”

Hiatt, who formerly worked as a ship agent, a dock operator and lab analyst, got emotional when talking about his time spent at the now closed Cameron Jetty fishing pier.

“We’re rooted here; this is home,” he said. “It’s worth fighting for.”