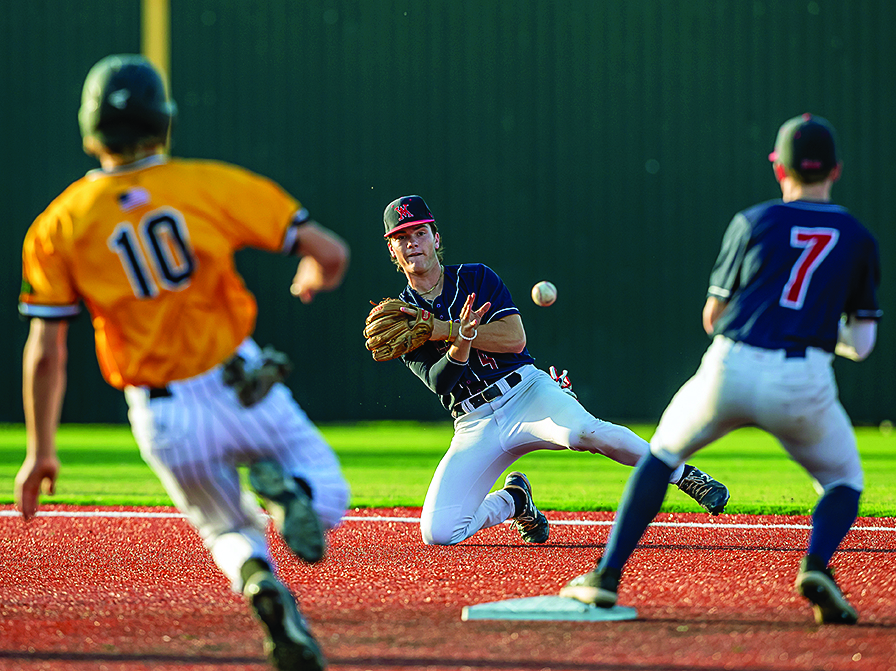 West Monroe’s Caleb Little tosses the ball to Jacob Anderson for the force out of St. Amant’s Cole Poirrier during the Class 5A championship game Saturday at McMurry Park in Sulphur. (Dennis Babineaux / Special to the American Press)

SULPHUR — The comeback kids of West Monroe pulled off another stunning come-from-behind win Saturday in the Class 5A state championship game.

The second-ranked Rebels rallied from a six-run first-inning deficit to beat No. 8 St. Amant 9-6.

Hayden Federico’s bases-clearing triple was the big blow, putting the Rebels up 8-6 in the sixth inning.

The Rebels rallied to win five of their final six games, including a 6-5 win over Dutchtown in the semifinals.

Caleb Ross started the comeback with a grand slam in the third inning to cut the Gators lead to 6-5.

Lee Amedee had two hits in the Gators’ six-run first inning, including a solo home run to lead off the game. But the Gators (34-8) struggled after that, especially against reliever Brennan Eager, the game MVP. The sophomore pitched 42/3 scoreless innings to close out the game with six strikeouts and no walks. No runner got beyond first base with Eager on the mound.

No. 15 seed South Terrebonne capped off its Cinderella run through the playoffs with a dramatic extra-inning win over the top seed.

Pitre opened the scoring when he launched the first pitch of the game over the left-field fence.

North Vermilion (38-3) tied the score in the second inning on a double by Braxton Savant that scored Dylan Naquin, and took a 2-1 lead in the third when LeBlanc doubled and scored on a John Touchet single.

The Gators (20-15) tied the score again in the fifth inning when Drew Pitre walked and scored on a single by Martin.

The Patriots seemingly seized control by scoring three runs in the bottom of the sixth. LeBlanc and Touchet scored on a throwing error and Brandt Fontenot on a balk to put NV ahead 5-2.

But South Terrebonne came back with four runs in the seventh. Dale John singled in a run and Drake Detillier hit a bases-loaded triple to score three and give the Gators a 6-5 lead.

Bryce Lajaunie picked up the win in relief.

One stroke of the bat by sophomore Brock Louque changed everything for Lutcher.

Louque was named the game MVP, going 2-for-4 with five RBIs.

Berwick had momentum in the second inning. Cru Bella scored on a throwing error to tie the score, and Jude Vasquez hit an RBI single for the lead. Mason Johnston added an RBI double.

Berwick cut the deficit to 5-4 in the fifth off Carter Williams’ double and had a chance to tie or win in the seventh after getting runners to second and third.