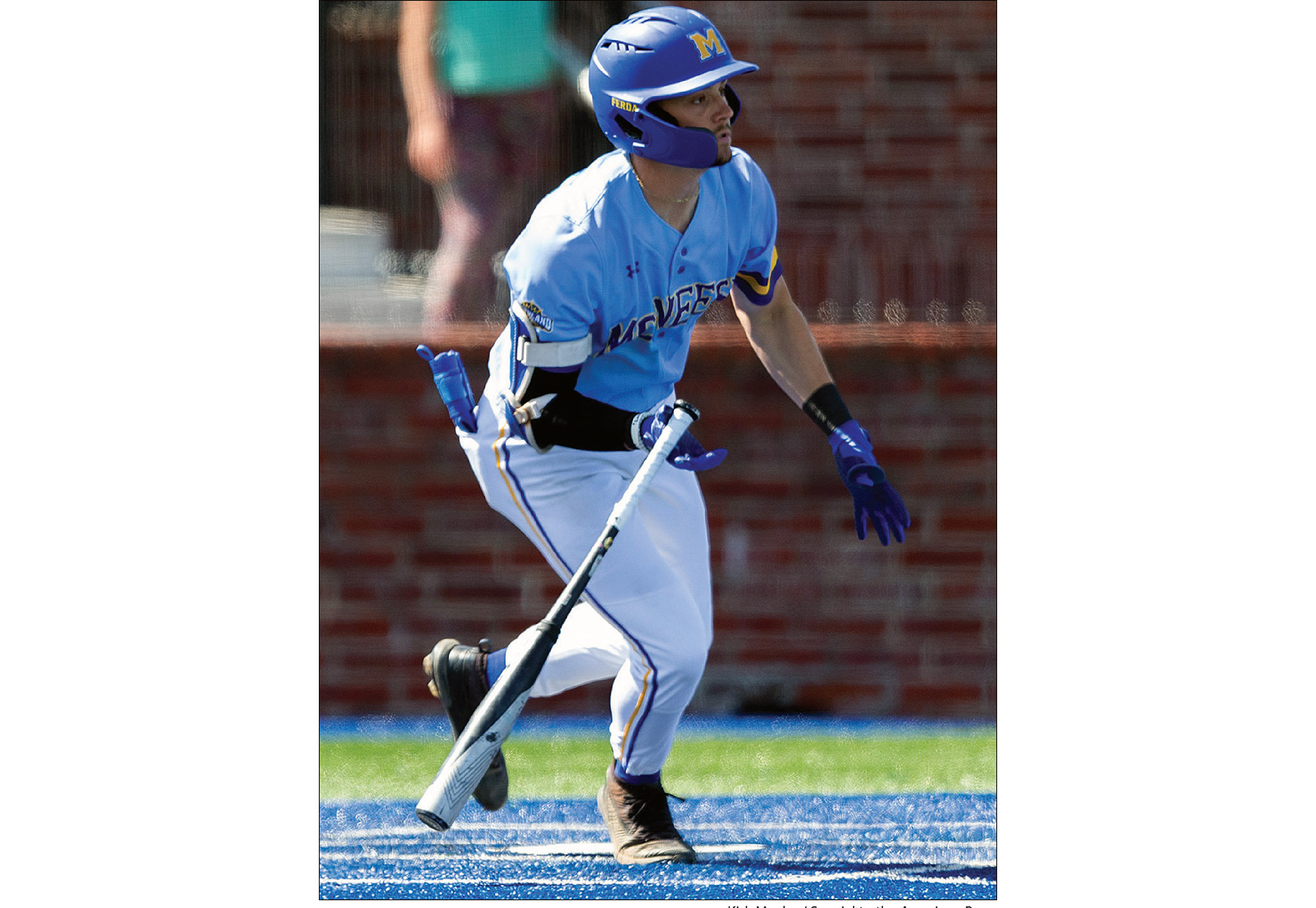 McNeese State shortstop Reid Bourque sends a ball to the outfield for an RBI double in the bottom of fourth inning against Eastern Illinois Saturday afternoon at Cowboy Diamond. Reid broke out of a slump with a three-hit, three-RBI day that included his first home run of the season. (Kirk Meche / Special to the American Press)

The comeback Cowboys have rallied all the way home for the remainder of the Southland season.

Despite a disastrous first inning, McNeese State crawled out from a huge hole to claim the SLC regular-season championship and the top seed in this week’s league tournament.

Not only will they host Bracket 1 starting, Thursday but would be home for a championship series if they advance.

McNeese was 6-3 during the regular season against its side of the bracket.

This after they stormed back from a seven-run deficit in the first inning Saturday to topple Houston Baptist 14-9 in Houston.

The Cowboys, who won their fourth consecutive game, found out they would be sole champs moments before Tyler Stone struck out HBU’s Braden Sanford for the final out when Southeastern Louisiana lost to Nicholls, 4-3, in 11 innings in their finale.

He could have been talking about the season or the deciding game itself.

An ugly first inning put the Cowboys behind right away. HBU scored seven times on three hits to grab a 7-0 lead.

“It was a challenging year in a lot of ways,” Hill said. “They were tired, they were exhausted and they just competed their tails off.”

McNeese took the lead for good on Reid Bourque’s single to short center in the top of the eighth. That gave the Cowboys a 10-9 lead, and they added from there.

Bourque finished 2-for-2 with a pair of RBIs. He also walked three times, one of a trio of Cowboys to do that. In all, 14 McNeese batters reached base by way of walks.

The Cowboys scored four insurance runs in the top of the ninth to make things easier.

Josh Leslie scored three runs and drove in another three on a pair of hits and walks to lead the McNeese offense. He was not alone.

Payton Harden had a pair of hits, including his second home run of the season, a two-run shot in that highlighted the Cowboys’ five-run second that cut the HBU lead to 7-5.

Perhaps nobody stepped up more than closer Cameron Foster. He threw a season-high 90 pitches, going 52/3 innings and allowing two runs (one earned) on four hits.

Foster came in to start the second and kept the Huskies down until the McNeese bats could catch up. Tyler Stone (2-0) allowed one hit over the final 21/3, striking out four.

McNeese took a 9-8 lead during a four-run fourth. Julian Gonzales’ two-run triple was the big hit.

McNeese has scored 10 runs or more in each of its last four games and seven of their last eight.

“I’m proud of these guys,” Hill said. “They have earned every bit of this.”

Hill is one win shy of the program’s all-time record set by the late Tony Robichaux at 263.