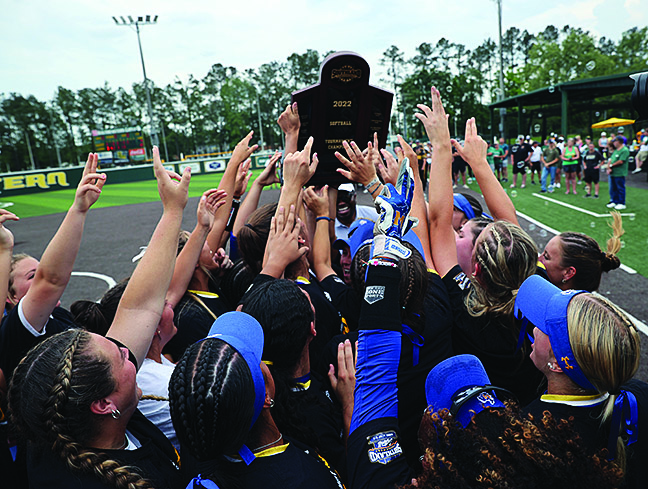 The McNeese State softball team raises the Southland Conference Tournament championship trophy for a second year in a row after beating Southeastern Louisiana in final Friday in Hammond. It was the Cowgirls’ eight tournament championship and fifth since 2016. (Special to the American Press)

The Cowgirls (38-19), who went 3-0 in the tournament, will learn which regional they will play in at 6 p.m. Sunday with the NCAA Selection Show on ESPN2.

It was the Cowgirls’ eighth SLC tournament championship as they extended their win streak to seven and 12 of their last 14.

Kendall Talley was 3-for-4, with three RBIs and two runs scored. She hit a two-run double down the right-field line to highlight a three-run fourth.

Tournament MVP Crislyne Moreno, who delivered back-to-back walk-off hits in the Cowgirls’ first two games, was 2-for-3 with two RBIs and two runs. She hit a two-run single in McNeese’s three-run first inning.

Moreno hit .700 in the tournament with five RBIs and two winning hits.

Reese Reyna went 2-for-2 with two runs, including a solo home run in the second inning. Kaylee Lopez drove in a pair of runs.

McNeese outhit the Lions (40-16), who committed three errors, 10-8. McNeese scored in all but the sixth inning. The Cowgirls won their fourth in a row against the Lions and fifth in six games.

Other Cowgirls named to the all-tournament team were Lopez, Tate, Jil Poullard and pitcher Ashley Vallejo.