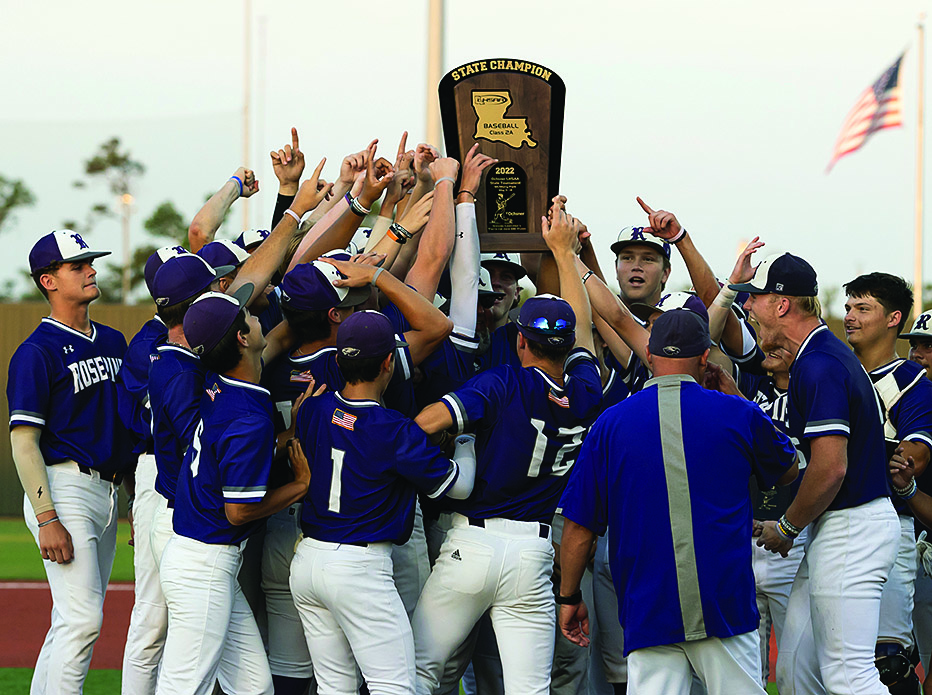 Defending state champion Rosepine hoists the championship trophy after beating Doyle 11-0 in five innings in the Class 2A title game Friday at McMurry Park in Sulphur. (Kirk Meche / Special to the American Press)

SULPHUR — The super seven went back-to-back with Rosepine’s talented group of seniors winning their second consecutive Class 2A state championship with an 11-0, five-inning win over Doyle.

“People think it’s easy because of you have talent, but it is hard to win and these kids did the work,” he said. “We have good youngsters behind the seniors. What I want them to take away from the seniors was how they worked, how they came to play every day and how they competed every day.”

“This was unexpected,” he said of the margin of victory. “They threw a good lefty pitcher but our guys went to work. We were able to get some timely hits early to get rolling.”

Rosepine scored two runs in the first inning. With the bases loaded, Frey hit a grounder to short. Doyle (25-15) got the force out at first but threw the ball away on the throw.

The Eagles broke the game open with a four-run third inning. Frey tripled to right-center field to score Smith, Logan Calcote and Grant Ducote. Frey scored on a Braden Trull double to extend the lead to 6-0.

Rosepine scored five in the fourth. Smith tripled and scored on a throwing error. Trull singled with the bases loaded to score Calcote. Cole Donahue added a two-run single and Aiden Cline drove in a run with a fielder’s choice.

Frey said he didn’t expect to enjoy this much success in high school.

“I didn’t have any expectations coming in and we went 13-15 my freshman year,” he said. “But, I’ve played with these guys since we were 5 years old. I knew we were going to do something special. It’s like a brotherhood.

“Some people are like, ‘I really don’t want to go to baseball,’ but we were never like that. We wanted it.”