A little should go a long way, particularly in the college game.

What was it Tom Hanks said about it — There’s no algorithm-ing in baseball!

Just look at what the dreaded “shift” is doing, rearranging the infield this way and that based on the latest printouts.

Can’t blame them. The coaches wouldn’t be doing it if all their computer simulations didn’t show it pays off in the long run. Maybe they have too much time on their hands.

But it’s not good for the game.

It’s not as simple as the modern ballplayer swallowing his pride and maybe learning how to lay down a proper bunt the other way.

Even with that counterattack, as satisfying as it is, it still just doesn’t “look” like baseball.

And you think it looks bad on TV? Don’t go near the ballyard these days with your own eyes.

On TV you’ve been knee-jerk conditioned to know that if a hard ground ball up the middle gets by the pitcher it’s either a hit or you’re about to see a great diving play and throw for the out.

Now, just when you get excited or experience that sinking feeling, there’s a third baseman waiting patiently behind second base for a routine play.

And that’s the TV version. It looks far worse when you’re at the game and see what’s going to happen in advance.

It looks like some gimmicky, force-fed rule cooked up for a charity softball tournament — Incrediball or some such.

Baseball needs to make sure there’s two infielders on each side of the field like Abner Doubleday would have intended if he had really invented the game.

You could still bring in extra infielders for those desperate situations, of course, only it would mean giving up an outfielder.

Sorry for the rant.

Besides, that may be the lesser of the problems, at least for the college game.

Who knows what will happen if the Southeastern Conference carries through with its threat to improve the strike zone?

For league games this season and later for the conference tournament, the SEC has been using Trackman and other high-tech gadgetry to analyze how balls and strikes are being called.

“This is another innovative step to improving the accuracy and performance of SEC officiating,” SEC Commissioner Greg Sankey said in a statement.

No, it’s insanity — and Sankey, the most powerful voice in college athletics and usually the smartest man in the room, surely knows that.

Exactly what do they expect to learn from this? How much money are they spending on the research?

Right now the research is minding its own business and just tracking data.

But unless cooler heads prevail and they let the whole experiment die on the vine — nothing to see here — then soon will come a startling announcement of the findings:

“The strike zone, as it’s called in college, seems to be bigger than what is called in the major leagues and what is specified in the official rule book.”

Well, duh. Of course it is.

It always has been and we didn’t need a Trackman study to uncover it.

Next they will allocate valuable funds to determine that the Earth is not flat.

Guess what else. If they want to dig deeper and waste more money, they will likely find that the high school strike zone is even bigger and the Little League version sometimes requires multiple time zones.

And the game works just fine that way. You just want an umpire who’s halfway consistent with it, which is a whole different research project.

You start holding college pitchers to major league strike zones and you’re begging for these 4-hour marathons to start stretching out over entire weekends.

Side note, but I always thought the expanded zone was a perfect equalizer to the aluminum bats.

Call it the “gentleman’s agreement strike zone,” often a bit low and outside.

The last thing televised college baseball needs is one of those strike-zone outlines on your screen.

In this case, too much information.

Thank the SEC for the effort.

But while the wink-wink strike zone may be imperfect, it’s hardly broken. So let’s don’t go fixing it. 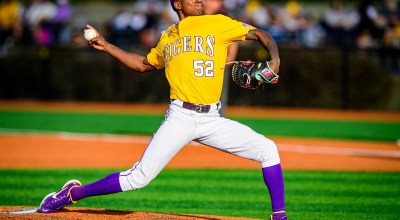