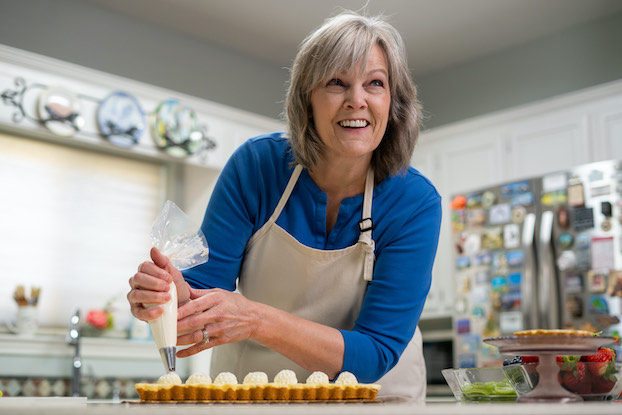 Terri Fontenot said children who take her class gain confidence and learn how to work in a small group and follow instructions. (Special to the American Press)

Terri Fontenot met her husband when she decided to take a ballroom dancing class, but it wasn’t her rumba that won his heart.

“I was going to visit my oldest sister in Vermont, and I asked what I could bring him back, and he told me he wanted an apple,” she said.

The apple is the official state fruit of Vermont where 150 varieties are grown.

“Anybody that can make an apple pie like that,” he told her, “I have to put a ring on her finger.”

It wasn’t Fontenot’s first apple pie. Long before she learned 1, 2, cha, cha, cha, she was whisking around the kitchen. It all started when her son announced he wanted to become a U.S. Marine intelligence officer, instead of attending college on scholarship.

“I wrote him a letter every day he was in boot camp and I baked,” she said.

She kept baking every eight months he was deployed. Coworkers were more than happy to sample and critique everything that came out of the oven. Neighbors began to ask if she would make a cake for a special occasion.

“I’d really like to serve your red velvet cake because it tastes so much like my grandmother’s,” they told her.

Sometimes they would simply ask for her direction, and she was happy to give it.

One day she walked into a Michaels Store and saw a woman piping buttercream roses with such passion, precision and pleasure Fontenot knew she had to learn. After a few classes, the teacher told her she would make a great teacher. So, she became certified.

Today Terri doesn’t just bake, she also offers in-home and private and group instruction for all ages. She especially enjoys sharing her love of baking in with the next generation of bakers.

“What is learned in baking goes far beyond the kitchen walls,” she said.

Youngsters think they’re enrolling in Terri Bakes Academy, to learn to make and/or decorate a cake, and they do. But they also learn details matter, according to Fontenot.

Hair is pulled back. Hands are clean. Aprons are donned. Dish towels are worn a certain way, and it is never used for wiping eggs from hands or surfaces. If dry ingredients fall on the floor, it can be cleaned later when everything is cleaned. If a wet ingredient falls to the floor, it is cleaned up right away. Safety first.

“You know really matters,” Fontenot said after she went through her litany, “having fun.”

She said children have taken the class and gained confidence, learned how to work in a small group and follow instructions.

“Classes help children become more independent. When they leave, they feel good about themselves and can share the results of their labor. Baking is love made edible.”