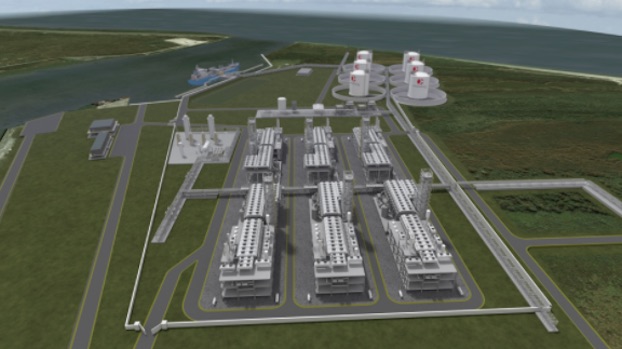 Commonwealth LNG is a LNG liquefaction and export facility located on the west bank of the Calcasieu Ship Channel at the mouth of the Gulf of Mexico near Cameron. The facility will have six 50,000 M3 modular storage tanks and will be able to accommodate vessels up to 216,000 M3. (Special to the American Press)

A Cameron Parish landowner who lives near the proposed Commonwealth LNG facility said it and other proposed LNG export terminals would destroy acres of wetlands that serve as a buffer against hurricanes.

“We’re exporting our national security future and economic future here in the U.S.,” Allaire told James Hiatt, Southwest Louisiana Coordinator for the Louisiana Bucket Brigade. “A few exporters and producers can generate huge profits. Every one of those profits, you look at your electric bill (and) food costs, your money is going into their pockets as profit.”

The Louisiana Department of Environmental Quality held a public hearing in March on an air permit for the Commonwealth LNG project. Allaire, who lives within two miles of the proposed site, spoke at the meeting and mentioned the plant releasing 19 million pounds of carbon dioxide daily. The meeting had a mix of speakers against the project, with others touting its economic incentives. Commonwealth LNG is set to open by the first quarter of 2026.

Allaire said Commonwealth is proposing to destroy more than 100 acres of forest and wetlands and another 40 to 50 acres to install pipeline and connect the facility to local transmission pipelines that come through Louisiana.

“All of this drainage and everything in this coastal Chenier Plain that we have will be affected,” he said.

Allaire also spoke of the need for America to move into renewable energy sources.

The Louisiana Bucket Brigade plans to host a media tour for parts of Cameron Parish next week.