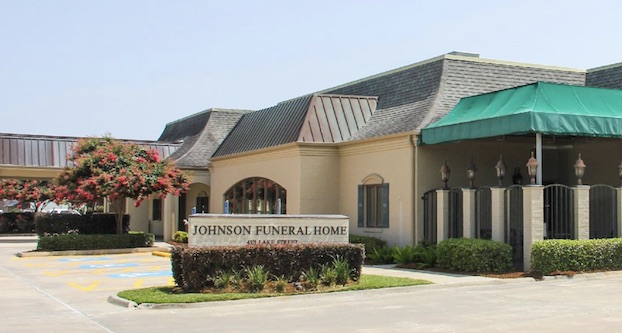 Johnson’s Funeral Home, a Lake Charles staple since its opening in October 1976, is finally operating at its Lake Street location nearly two years after Hurricane Laura caused more than $5 million in damages in August 2020.

The family-run business, owned by 73-year-old Zeb Johnson, has returned to its main hub after being run for more than a year post-Laura out of its smaller Jennings location. Funerals were held at various churches around town. Some displaced staff worked remotely, while others whose homes were severely damaged by the hurricane shared living spaces.

Hurricane Laura’s Category 4 winds tore the roof off the Lake Charles facility and blew off rooftop air conditioning units, allowing rain to make its way inside the building. Staff worked to clean up the building in the immediate weeks after Laura’s landfall, but structural engineers told them to stop because the roof could collapse at any moment. Another $1 million worth of furniture, computers, electronics, lamps and picture frames were also damaged.

“Everything you see, other than the brick on the outside of the building and the windows and exterior doors, is brand new,” he said.

Hurricane Laura’s destruction didn’t slow down the funeral home’s business. The hurricane also damaged the Sulphur and Moss Bluff locations, leaving the Jennings facility as the only option to serve as the main hub. Daily operations, such as embalming and preparing bodies for funerals, became a logistical nightmare, Johnson said.

On top of that, the funeral home was already dealing with double the volume of funerals because of the COVID-19 pandemic, Johnson said.

The more than 60 staff workers at Johnson’s stepped up to meet the demand, despite many being displaced after the hurricanes, Johnson said. Many coworkers ended up living together.

“We had a couple of employees whose families were hundreds of miles away for a year,” he said.

Hankins said the funeral home’s manager, Lonnelle Aquillard, returned to her home just three weeks ago after living with her mother, whose home also flooded last May. He said housing was provided once officials realized some employees were living out of their vehicles.

Multitasking wasn’t an option after Hurricane Laura, Hankins said. Staff were typing up obituaries from home, and death certificates were being done remotely.

“The stress and emotional fatigue of just trying to do what was usually a routine task became overwhelming,” he said. “I can’t stress enough how excited we are to be in this building.”

Hankins said the contractor spoke with Johnson daily to understand every detail of the Lake Charles building’s layout, from the crown molding to the lights.

“He knows this place like the back of his hand,” he said. “He went inch by inch, and the building was put back exactly like it was.”

Graham Hankins, the funeral home’s chief financial officer and Johnson’s grandson, said he wrapped up work on a year-long, $40,000 project to rewire data, phone and internet for the entire facility on August 15, 2020.

“Five days later, Hurricane Laura destroys the whole thing,” he said. “I had to go to the studs and pretty much guess based on which way I could remember the way the room looked and where the jacks would be.”

The local churches that provided their facilities for visitations and funerals were key in making sure operations weren’t slowed down, Johnson said.

“Every one of them called us and said we want to help you,” he said.

Churches were offering help, despite being of varying denominations, Hankins said.

“We were having rosaries in the Baptist church,” he said. “One church would offer its facility, then they would have to do repairs, so we would go to another one. It really was a beautiful thing.”

Roughly 600 funeral services were held at nearby University Baptist Church on Lake Street. Johnson joked that many residents thought the funeral home purchased the church.

“We moved file cabinets and computers in there because the parking lot was so torn up, we couldn’t even put a temporary building there,” he said. “There was junk everywhere.”

Because Hurricane Laura changed how service was being delivered, it was expected that customer satisfaction would decline. Graham said the opposite happened.

“We actually had our highest satisfaction score not only that we ever had, but we had a No. 1 overall score against a group of 200 funeral homes nationwide that are similar size as us,” he said. “What that told us is it really had nothing to do with the bricks and mortar of the situation. It was all about the staff we had and them spending time with families. Apparently, that can happen anywhere.”

Johnson said residents he would visit at funeral services would ask when the main facility was coming back.

“There was a genuine concern, and I realized they felt like this was an important part of their life here,” he said.

Johnson credited the Lake Charles community for pushing through the adversity left behind after the hurricanes.

“They have been through so much so many times, I think they just know how to take care of each other,” he said.