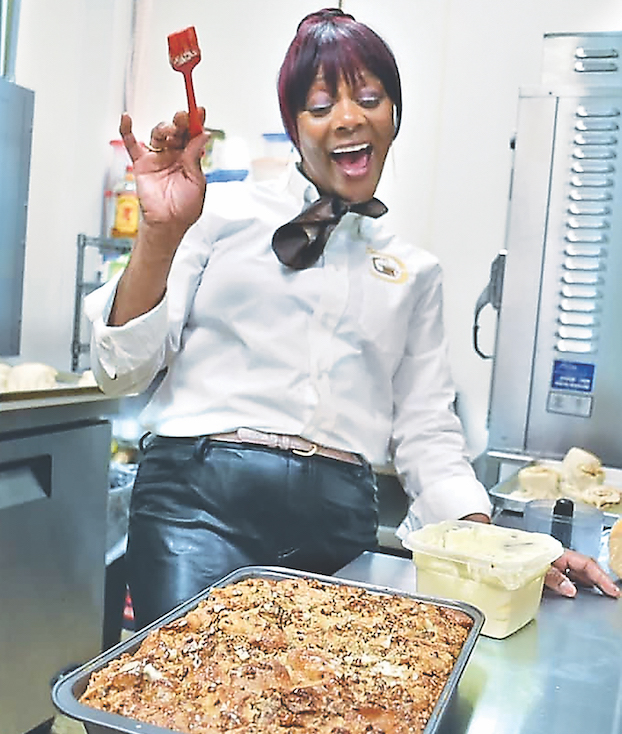 Michelle Williams shows off her fresh-baked bread pudding. (Special to the American Press)

Retired flight attendant Michelle Williams is back at the airport. Instead of seeing to the safety, security and comfort of one airline’s passengers, she’s serving up hot coffee and ladling up a quality of food seldom encountered in an airport setting, that includes her mother’s peach cobbler.

From the age of 21, she dreamed of owning a coffee shop that would offer more than just a satisfying cup of wake up, keep going or sit a spell and take the load off. Common Grounds, now located at Lake Charles Regional Airport, is the realization of that dream.

“My mother cooked what most people would consider a complete Thanksgiving meal with all the trimmings every Sunday,” Williams said. “My father encouraged it. You never know who or how many girlfriends Michelle will bring home after church, he’d tell her.”

It is Williams’ gift to discover common ground between people and connect. This tradition of cooking and inviting continued, even after Williams moved away and began her airline career. Soon, flight attendant friends began to invite themselves.

“I don’t have to work this weekend. Can I fly in, they’d ask. Everyone in Houston knew about my mom’s peach cobbler,” she said.

“I  made sure she did,” Williams said.

LaBelle has her own food line, including peach cobbler.

“Mine tastes better. Now, she’ll probably never tell me she likes mine better than hers.”

In addition to coffee and peach cobbler, Williams offers shrimp and grits, avocado toast with a twist, Philly cheese steak and fudge. She said her sandwiches are popular because she uses a special bread.

“I serve up more than the cold sandwich you’ll find at most airports,” she said. “I serve food that’s good for the soul. “One customer won’t eat anything but my potato soup.”

While the airport puts Williams “in her element,” it is in the kitchen that she feels most at home.”

“Cooking and baking has always been a habit,” she said. “That’s where the excitement is, in the kitchen. It’s where I prepare the foods that I love to make and I put my love into it, I put God’s love into it. I think that’s why everything comes out so good.”