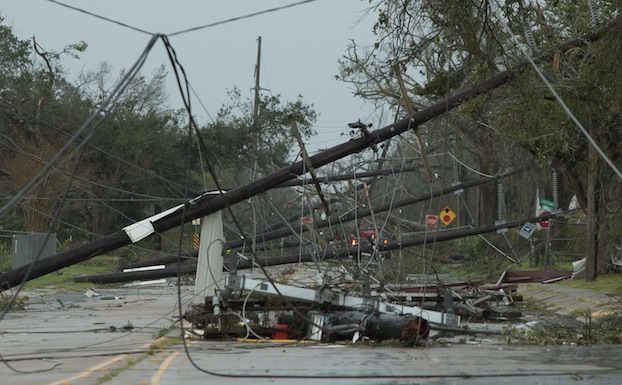 Urban Design Associates has been hired to work with local leaders to help rebuild stronger housing and infrastructure in the wake of Hurricanes Laura and Delta. (Rick Hickman / American Press Archives)

Is this a program that can help me repair or rebuild my home? That’s the question that drew about 50 residents, many from North Lake Charles, to a Restore Louisiana Action Plan public hearing this week at Zion Tabernacle Baptist Church in Lake Charles. The recovery program is for damages from Hurricanes Laura and Delta .

Not everybody got the answers they were hoping to hear, but one takeaway was, fill out the online Restore Louisiana survey, even for damages from the severe winter storm in February 2021 and Severe flooding in May 2021. Monies have not been allocated for these events at this time, but could be.

Tell family and friends about Recover Louisiana. The survey is a first step in what could become an application process for repairs or a newly constructed house for those who qualify and who made initial FEMA claims. They might be first in line if they’re one of the 6,303 the program is hoping to help, first.

“April 1, we submitted a new action plan to HUD, and that started a 30-day clock for this outreach and engagement process to occur,” said Pat Forbes, Restore Louisiana. May 1 that comment period will end. There is no deadline for HUD on how long they have to approve. We’ve seen them take 30 days. We’ve seen them take 90 days. What we guess and anticipate is sometime in June we hope to get that approval from HUD. Shortly thereafter we’ll get a grant agreement. That means that funds are available in the federal treasury to begin this program.”

Here’s a drill down into how much of these funds will be used to repair and rebuild houses in Southwest Louisiana and how need will be prioritized.

Of the $1.5 billion allocated by HUD, three hundred million dollars is budgeted specifically for the Restore Louisiana Homeowner Assistance Program.  (To see the complete scope of the program, go to the program website.)

Based on questions and answers during the meeting, the $300 million homeowner assistance is not assistance that will benefit renters, although a different aspect of the program will benefit developers, landlords to help renters.) It doesn’t address the condition of public housing even though it is money from HUD. The income requirement will be based on current household income, not income at the time of the storm. It is not funding intended to repair or replace outbuildings or fences. It can’t replace funds for shoddy contractor work, though it can help if the contractor took payments and didn’t do any work. It won’t be a quick fix for individuals living in FEMA trailers who are now required to pay rents as high as $1,200, (However, some of those individuals may benefit from the program if they qualify.)

Though Forbes and Jeff Haley mentioned repeatedly at the meeting that Restore Louisiana is not funded with FEMA dollars, nor is the program FEMA administered, having a FEMA Individual Assistance (IA) case number and other information relevant to that case number is key.

“What about people turned down by FEMA who need help?” asked Cindy Robertson.

She noted that some inspections weren’t done in person by FEMA because of COVID and people with insurance weren’t considered for certain FEMA assistance.

“Right now, we would not be able to help those people that don’t have a FEMA claim,” said Haley. “That’s the funding that HUD has given us. We have to show HUD that we have served the people that they gave us the funding for.

“But until we serve the people that are in the 6,300 and can show HUD we did that with the funds they gave us and there is still unmet need out there, we won’t be able to transition.  “It’s not that we may not be able to at some time. Every disaster plan we’ve worked on has been amended.”

According to Restore Louisiana data presented at the meeting, 40,338 housing units were damaged in the 2020 storms, 19,337 were displaced to shelters and 3,899 were impacted by both Laura and Delta. Of those impacted, 19,117 were homeowners, 12, 814 received minor damage, according to FEMA Individual Assistance data. Another 6,303 home owners received major damage. These are the individuals Haley said will receive priority when they meet other qualifications.

These figures represent damages in 24 parishes impacted by Hurricanes Laura and Delta. Fifty-nine percent of the damages occurred in Calcasieu Parish. However, that doesn’t mean that the 6,303 targeted homeowners are all from Calcasieu Parish.

“Based on current funding limitations – because we know it’s never enough, even with the extra allotment – to be placed in an application phase, you must have owned and still own the damaged home, you must have occupied the house at the time of the disaster, you must have sustained major or severe damage per FEMA and not received or expect to receive structural insurance payments greater than $25,000,” said Haley.

The most vulnerable, for example the young and the old and those with disabilities will receive priority.  The program is designed to assist persons who are low to moderate income. Individuals who complete the survey, go to the application stage and are found to qualify will be able to choose to have Restore Louisiana take care of the project start to finish, hire their own contractor, receive reimbursement for work already completed or buy outs for those in flood zones.

Forbes said the meeting was not only about getting comments and responses to meet HUD’s requirement.

“It can help people understand that help is on the way,” he said.

For those who didn’t attend the meeting, it is possible to make comments by email by May 1. Comments matter, according to Jeff Haley and Pat Forbes, representatives from Restore Louisiana. It could help tweak the action plan. The Restore Louisiana plan is online at restorela.gov and on Facebook, Restore La. The email address is info@restore-la.org. To speak to a program representative, call 1-866-735-2001 M-F, 8 a.m. to 5 p.m.