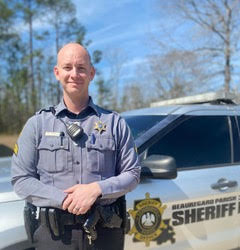 Beauregard Parish Sheriff’s Deputy Chris Rabb truly has the heart of a servant. When he’s not serving his community as a full-time patrol deputy with BPSO, Rabb is serving his nation with the Air Force Reserves.

Rabb first enlisted in the reserves in 2005, following the tradition of his family’s military service.

“My grandfather was active duty in the Army and my father is an Air Force veteran, so it just made sense to me to keep that tradition going,” he said.

While dedicating his time to the reserves, Rabb earned a bachelor’s degree in criminal justice from McNeese State University and then moved with his wife from Louisiana to his original home in North Dakota. From there, the family moved to Colorado Springs before ultimately answering the call to return to Louisiana. Last year, their move came full circle by bringing the family back to DeRidder, where Rabb had graduated from high school.

“It was really a combination of wanting to be near family and wanting to raise our family in this environment. Beauregard Parish is a warm and welcoming area that we felt was the best place for our family, and so far we have been very happy with that decision,” he said.

“I think the transition to civilian law enforcement was the logical next step for me. I enjoy working in the law enforcement capacity on both sides, and both are equally challenging to me. I feel like I have made lifelong friends in both worlds,” Rabb said.

In August, Rabb returned from a six-month deployment to Alialsalem, Kuwait, where he assisted with security and screening procedures at the air base. There, he served in a squad leader position of a team that performed background checks and physical checks of individuals wishing to enter the base’s perimeter, ensuring the safety of all those involved.

Rabb said he believes experiences from his military service and deployments have helped make him a better deputy.

“I believe it has helped me in the leadership aspect and in my professionalism; it forced me to mature and to be able to take on serious roles as a leader. I think it also has given me a pretty good head in serious situations,” he said.

His service in both roles is never without risk, of course, and just as the rest of the nation eyes the conflict in Ukraine, Rabb said his family is no different.

“Of course, there’s always that fear that you might get that call in the middle of the night and have to leave, but honestly my entire career has had a ‘ready-to-go’ mentality. Having enlisted in the first few years after 9/11, it’s just become a part of our lives at this point,” he said.

For now, Rabb is focused on his future at BPSO. With 17 years under his belt in his military career, he said he knows that part of his work may soon come to an end but that he plans to remain with the sheriff’s office for as long as he is physically able.

“The environment here in Beauregard Parish, there really is nothing else like it. There is an awesome community support here that is not like anything else. Someone is always thanking me for my service and telling me they appreciate me for what I do, and it’s genuine when they say it. That’s what made us decide to move here and it is what keeps me motivated every day to protect and serve this community.”