Calif. man arrested in Calcasieu with 12 trash bags of weed in car 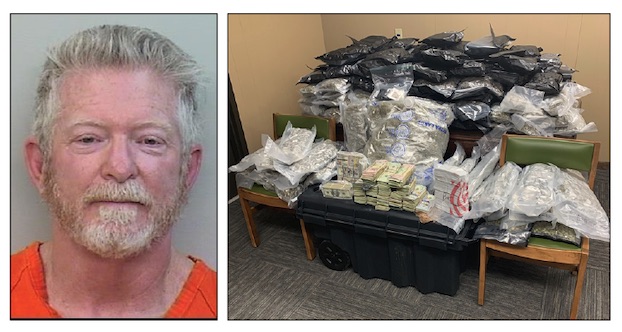 Michael J. Hutchison is charged with charged with drug possession and money laundering. (Special to the American Press)

A California man was arrested in Calcasieu Parish on Wednesday after a stop on Interstate 10 for a traffic violation.

Calcasieu Parish Sheriff’s Office spokesperson Kayla Vincent said deputies could smell the odor of raw marijuana emitting from inside the car when they pulled over Michael J. Hutchison, 59.

During a subsequent probable cause search of the car, detectives located 12 trash bags containing a total of 137 pounds of high-grade marijuana, with an estimated street value of about $500,000.  Detectives also located $295,227 and 49 money orders, totaling $32,800, inside the car.

Hutchison was arrested and booked into the Calcasieu Correctional Center and charged with possession of CDS I with intent to distribute; and money laundering.

The Combined Anti-Drug Task Force is a collaborative effort, comprised of law enforcement officials from local, state and federal agencies, aimed at ceasing the trafficking of illegal substances in Calcasieu Parish.