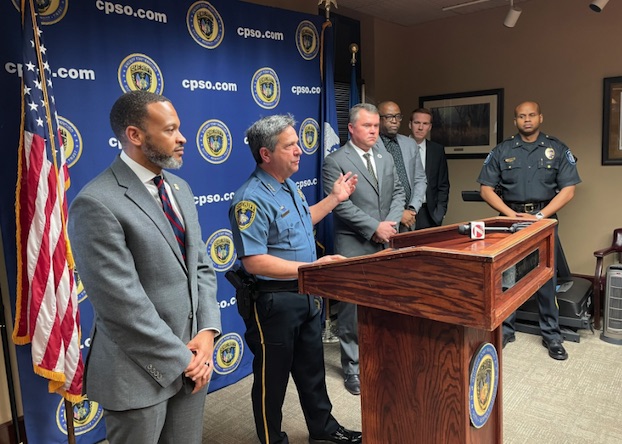 The Calcasieu Parish Sheriff's Office has announced a Human Trafficking Task Force for the southwest area of the state. It will partner multiple agencies. (John Guidroz / American Press)

“We are going to take a strong stance and do everything we can to make sure they don’t harm anyone in our public,” he said. “It takes all of us being on the same page for this to work and be successful in our community.”

Brandon Brown, U.S. attorney for the Western District of Louisiana, said a human trafficking task force was created in northwestern Louisiana in 2018. The COVID-19 pandemic and the 2020 landfall of Hurricanes Laura and Delta delayed the creation of a similar task force in Southwest Louisiana.

Victims of human trafficking are often underage and forced into abusive situations, Mancuso said. He spoke of a case several years earlier that involved a woman who was threatened and forced into prostitution.

“It’s a form of modern-day slavery in my opinion,” Brown said.

“They can target this area with the casinos and tourism we have,” he said. “We have rail here, the port, (Interstate)10.”
Brown said law enforcement agencies have used social medial to come up with better strategies to monitor human trafficking. However, criminals have become smarter at the same time.

“We have to stay vigilant, aggressive and creative at the same time in order to take down these organizations,” Brown said.
Anthony Celestine, director of the Calcasieu Parish Police Jury’s Office of Juvenile Justice Services, said the agency is committed to finding results and solutions that effectively combat human trafficking.

“We want to do our best to assure that every young child and young adult has the right to be free from the ugliness of human trafficking,” he said.

Brown said there are plans to create task forces in other areas of the state. January is National Human Trafficking Awareness Month.