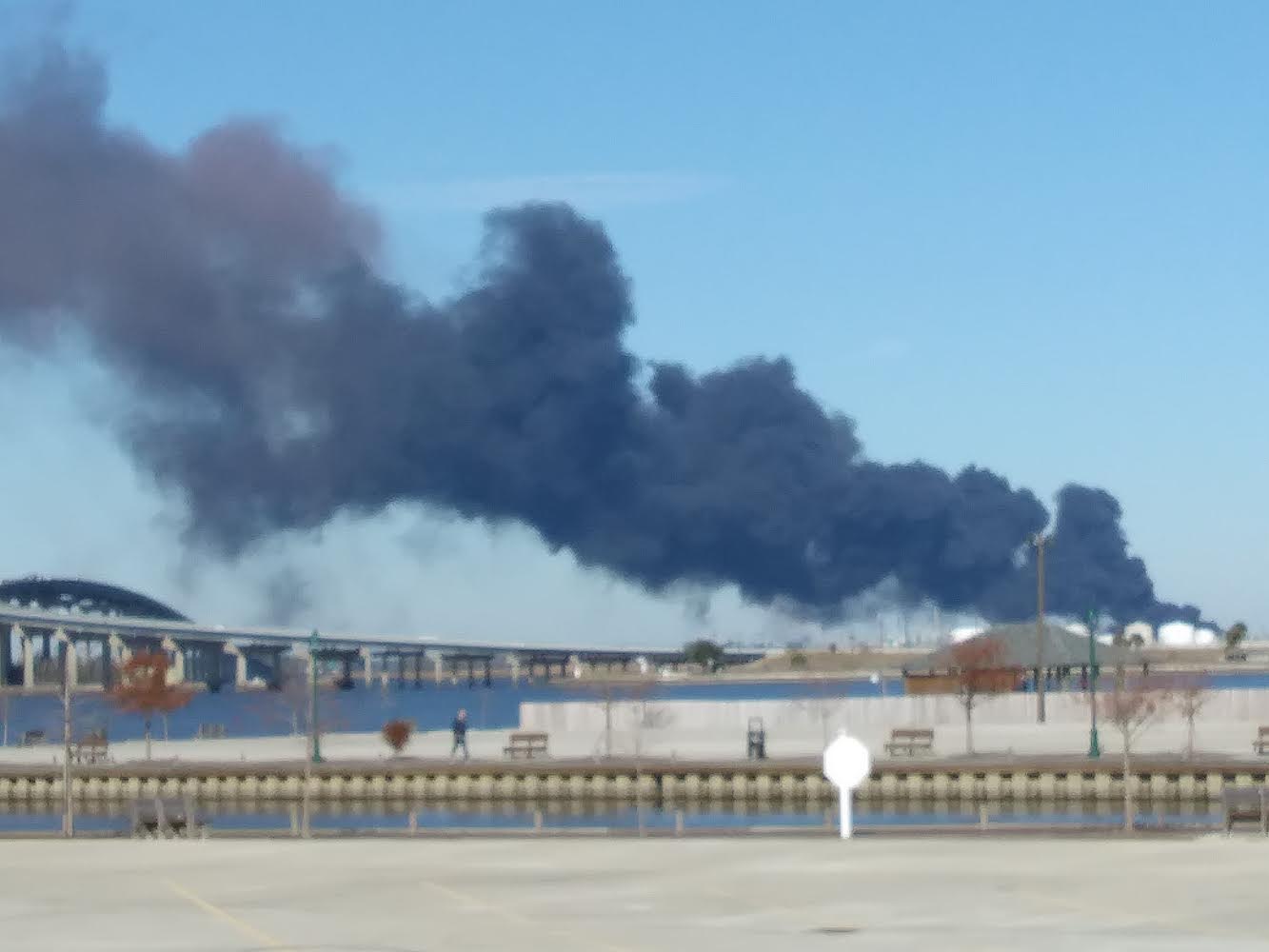 Officials confirmed an explosion and fire at an empty ethylene dichloride storage tank at the Westlake Chemical South plant shortly before 11 a.m. Wednesday. A large plume of smoke was visible throughout Westlake, Sulphur and Lake Charles, with residents posting photos on social media.
Joe Andrepont, Westlake Chemical community and governmental relations principal, said six people were injured, and none of the injuries were life-threatening. Two of the injured were taken to Christus Ochsner St. Patrick Hospital, and three were taken to Lake Charles Memorial. One was treated with first aid at the scene.
Because the storage tank was empty, the fire was extinguished shortly after the explosion, Andrepont said. The Calcasieu Parish School Board announced that all Sulphur and Westlake public schools were placed under a precautionary shelter-in-place, but it was later lifted.
Andrepont said air monitoring showed no environmental issues associated with the explosion, and there were no road closures.
It’s too early to tell what caused the explosion, but it is being fully investigated, he said. The Calcasieu Parish Office of Emergency Preparedness, State Police, and Coast Guard were notified of the incident.
Gen. Russel Honoré, head of GreenArmy, said in a statement that Westlake Chemical “is growing their list of dangerous chemical-producing incidents.” He said the incident shows that every plant should have an Environmental Protection Agency inspection team on site.
“We’ve been here before, but enough is enough,” he said. “These powerful fossil fuel corporations try to avoid the already-too-relaxed rules and routinely violate the Clean Air and Clean Water Act, but often see minor slaps on the wrist for their violations. It’s time that residents of Southwest Louisiana get control of their public safety and health and out of the hands of these super polluting plants.”
The Sierra Club, a grassroots environmental organization, issued statements from several local residents. Roishetta Ozane, founder of the Vessel Project and Southwest Louisiana organizer with Healthy Gulf, said she could see the large plume of smoke from the door of her FEMA trailer outside of Westlake Chemical.
“I can smell chemicals through my two masks, even after Westlake lifted the shelter-in-place and said that vapors have dissipated,” she said. “People need to band together to let industry know this is unacceptable.”
James Hiatt, Southwest Louisiana coordinator with the Louisiana Bucket Brigade, said in a statement that industries should not be allowed to “gloss over their negligence as they continue to place ether profits over our people.”
“This is an instance where hazard recognition and mitigation has failed,” he said.
EPA Administrator Michael Regan announced Wednesday several steps to address communities affected by pollution, including Mossville. One effort includes the Pollution Accountability Team, expected to begin this spring. It will monitor facilities via air and land, and will investigate emissions found at certain sites.