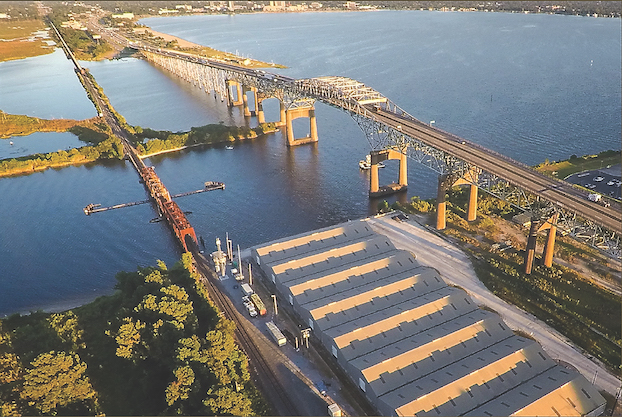 In this 2017 file photo, traffic flows on the I-10 Calcasieu River Bridge. Construction on the bridge began in 1949. The 1.3-mile-long structure was officially named the World War II Memorial Bridge in June 1951. It opened Sept. 28, 1951, with 5,286 pairs of dueling pistol likenesses adorning the iron railing. (Rick Hickman / American Press Archives)

DuRousseau said the task force is pleased with the money proposed for the I-10 bridge in Calcasieu. However, the structure is vastly different from the Mississippi River bridge.

“We understand they are both needs, but the Mississippi River bridge is a sound structure suffering from congestion and growth,” DuRousseau said. “The Calcasieu River bridge is obsolete and in desperate need of replacement. We just wish that (Edwards) would focus more funding toward the I-10 bridge and the recovery of Southwest Louisiana.”

“We don’t underestimate any project

See BRIDGE, A5 Continued from A2

needs in the state; we just need to prioritize these as a life safety issue and a commitment to protecting Louisiana citizens,” DuRousseau said.

Shawn Wilson, secretary for the state Department of Transportation and Development, said in a videotaped message at the Jan. 13 Chamber banquet in Lake Charles that replacing the I-10 bridge is expected to cost upward of $860 million. He said $162 million has already been set aside for the effort. The state will dedicate roughly $150 million in 2023 and 2024 from vehicle sales taxes to the public, with the I-10 bridge project anticipated to get 75 percent of that amount.

Wilson added that tolls are being considered as a financing option for the bridge replacement, but he didn’t specify what that amount could be. DuRousseau said the task force is working closely with the state legislative delegation to consider every funding option to reduce or eliminate tolls for local drivers.

“We want to avoid a burden on the residents of Calcasieu Parish and surrounding parishes who depend on the I-10 bridge,” DuRousseau said. “Our pursuit will not end until this is resolved.”

Earlier this month, President Joe Biden mentioned the I-10-Calcasieu River bridge and his visit to Lake Charles last May when discussing the Build Back Better infrastructure plan, which includes $40 billion for bridge improvements.

Specifics on how much money could be set aside for the new I-10 bridge have not been released.