Cowboys look to use home stand to climb Southland standings 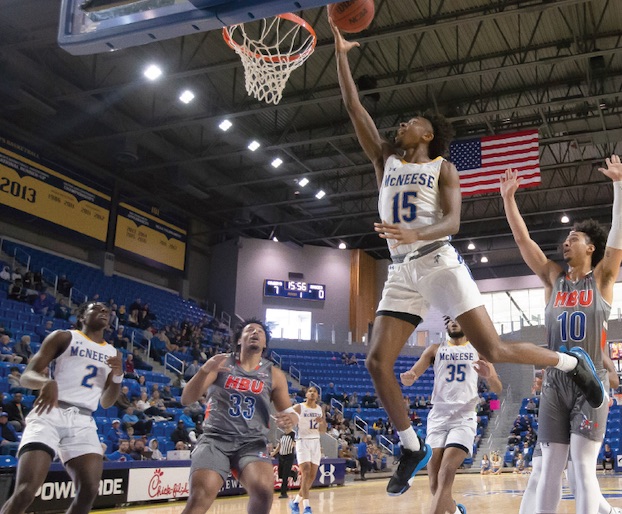 McNeese State Cowboys guard Zach Scott (15) puts in the layup in the first half of a Southland Conference matchup against Houston Baptist at The Legacy Center Jan. 15. (Rick Hickman / American Press)

Having won three of their last four and already survived the longest road trip of their league play, the Cowboys hope to keep rolling at home.

It won’t be easy.

Over the next two weeks McNeese State will play four straight home games in the Southland Conference. It is a great chance for the Cowboys to make a run up the standings.

McNeese will enter Thursday’s game against Nicholls at 8-12 overall but 2-1 in the league and tied for second, one game behind New Orleans, who they beat in the Tip-Off Event.

Nicholls, the preseason pick to win the SLC, is just 1-2 in the conference.

The Cowboys will play New Orleans on Sunday in a game that will be live on ESPNU. It’s the first time and ESPN network will show at Cowboy game from Lake Charles since 2002.

“That will be huge for the City and the University,” Aiken said of Sunday’s nationally televised 5 p.m. tipoff in the Legacy Center. “We will be able to showcase our arena and the progress the school and city are making.”

He also knows that won’t matter as much if the Pokes fall Thursday night against Nicholls.

“We can’t really worry about Sunday until after Thursday,” Aiken said. “To fully set up Sunday we have to win on Thursday. That will go a long way to create excitement.”

Aiken also knows that the next four games will go a long way in deciding the fate of this season. After the stretch McNeese will have just two home games remaining with seven to play.

“It is a huge stretch for us,” he said. “Time for us to make some hay. If we can string some wins together it will be big for us. These games for us at home are huge.”

The same can be said for the Cowgirls, who will play Nicholls Thursday and New Orleans Saturday. The Cowgirls are 1-2 in the SLC after winning last weekend at Incarnate Word.

Difference is while the men’s team is playing two clubs expected to be in the league’s title race, the women are facing teams that have combine just one Southland victory so far.

“I thought we improved both games last week,” said McNeese women’s head coach Lynn Kennedy. “We know it is important that we win at home.

“It is time to put a little stretch together. We have to be ready for this week.”

For both the men’s and women’s teams at McNeese the next four games are will say a lot about their seasons. At least they will be at home.