A deputy and his ‘once-in-lifetime’ partner 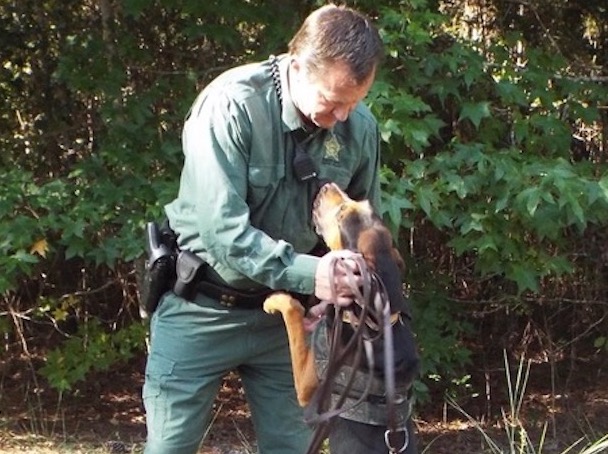 Deputy Ricky Stephens and K9 Duke have made more than 100 finds on the Vernon Parish Sheriff’s Office Chase Team. (Special to the American Press)

Vernon Parish Deputy Ricky Stephens and his Bloodhound K9 Duke have become a formidable force in law enforcement in the Southwest Louisiana area, and beyond.

With more than 100 finds under his collar, Duke has more finds than any other K9 in the region and Stephens said he believes that record may surpass others across the nation, as well.

“There’s no other dog like Duke, I’m certain of that. He’s what I consider a once-in-a-lifetime dog,” Stephens said.

Stephens brought Duke into his home as a puppy and he worked at training the dog to track in his own free time. At five months old, Duke surprised Stephens by tracking down a wounded deer on his own, and Stephens said it was that moment he realized he might have something special on his hands.

At the time, VPSO had a Bloodhound named Sissy who was nearing retirement age and Stephens decided to give a try at training Duke for the Chase Team. His expectations were quickly exceeded, he said.

“All my life I have had hounds. They’ve all got incredible noses, but Duke has something more; he has the heart for the chase. He absolutely loves what he does and he puts everything he has into it. That is why he is so successful,” Stephens said.

Stephens has worked for law enforcement for 29 years. After working for 15 and a half years in corrections, he moved to the Vernon Parish Sheriff’s Office and began to work at building the department’s chase team. In 2007, he became the Chase Team Supervisor and with the support of Sheriff Sam Craft and Chief Detective Rhonda Jordan he said he was able to build the Chase Team to become one that now provides support throughout southwest Louisiana and Texas.

“Deputy Aaron Barbee and I have worked long hours to make this Chase Team what it is now, and I am very proud of what we have made this team into,” Stephens said.

The job has had its highs and its lows for Stephens and Duke. The Bloodhound has found criminals on the run for six hours or longer, with his longest successful cold trail being six days old, but Stephens said not all chases involve criminals.

“It’s not always about finding the bad guys, many times we are looking for Alzheimer’s patients or lost children. Those are the ones that stay with me the most. We have found children in ponds when it’s too late to save them. But in order to get up and do it all over again you have to find a way to put it behind you. It is a job that someone has to do, and in the end I know we are at least bringing closure to a family,” Stephens said.

He recalled one of Duke’s most memorable finds, when the pair located an elderly woman in the Junction community who had gone missing during a medical episode. Duke found the woman safe, and allowed for an emotional reunion for the woman and her husband.

“The other deputies and I took turns carrying her out of the woods and she kept asking for her husband. When they saw each other they were both crying, and then her husband hugged me so tight and thanked me. I couldn’t open my mouth to speak or I would have been crying, too,” Stephens said.

For Duke, his reward was some extra affection and pats on the head.

“All he has ever wanted after a successful find was to be loved on more. He knows he has done a good job,” Stephens said.

Stephens made the decision to retire last year, but he remains commissioned with VPSO and is still able to bring Duke out to assist in chases. With Duke reaching the mature age of 10 recently, Stephens said he is giving his four-legged partner the say in when to call it quits.

“This has been a big journey and a great ride. Duke and I have seen things that most other humans will never see, but I’m incredibly proud of what we have accomplished. In my book, Duke’s a hero,” he said.