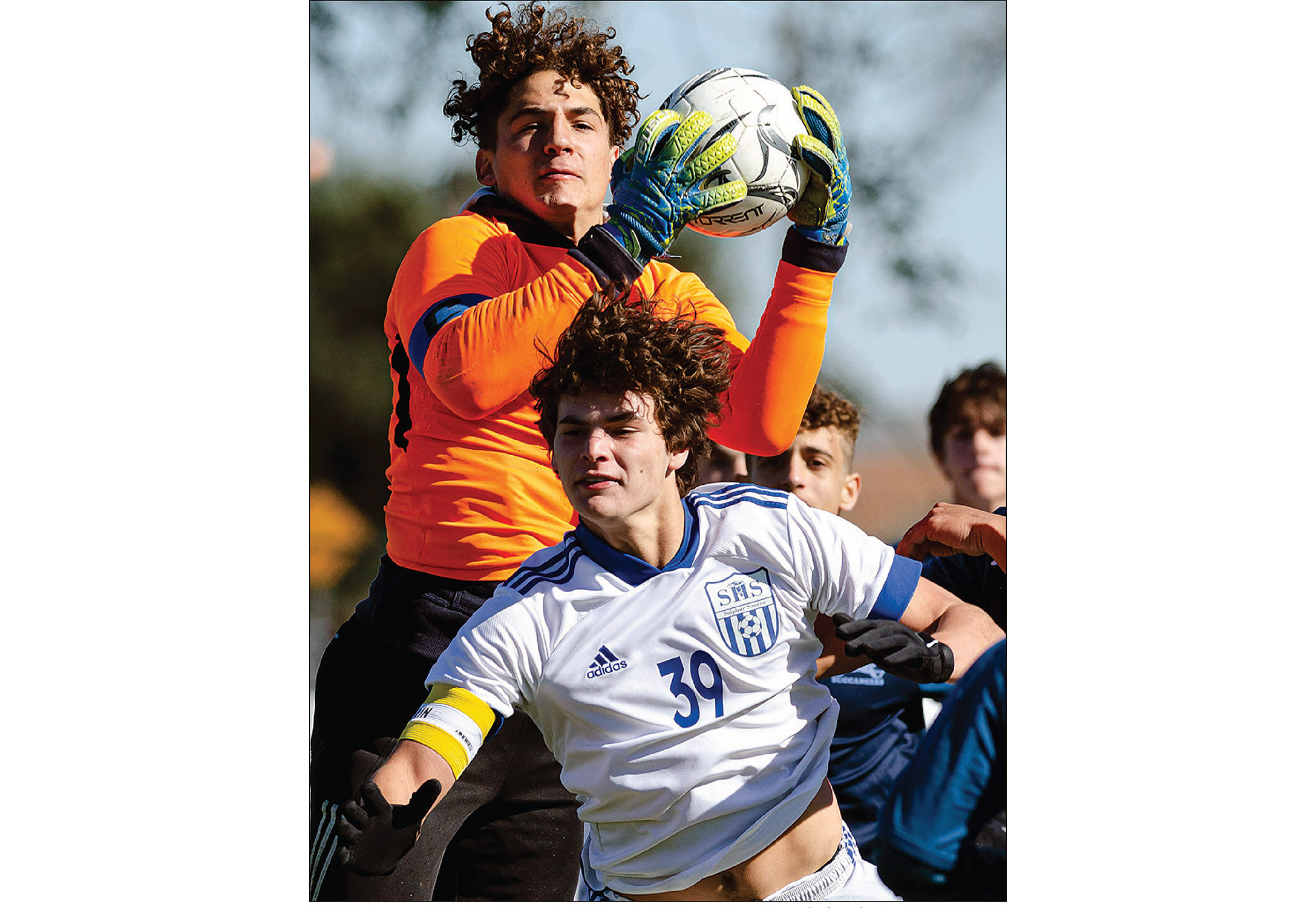 Barbe goalkeeper Reed Boyd stops the Tors’ Kaleb Lirette from scoring on a header Saturday at Barbe High School. Lirette scored in the game on a header, giving the Tors a 3-2 lead. (Rodrick Anderson / American Press)

The Sulphur Tors manufactured a comeback from a two-goal halftime deficit to beat archrival Barbe 4-2 Saturday and win its first district championship in 21 years.

“The first 56 seconds of the game we should have scored, and that would have changed the game,” Sulphur head coach Trevor Foolkes said. “They got an early goal and that got them fired up and the momentum their way.

“Since the Southside game this week, we are not the same. Obviously the second half is what we have been playing all season, so that was a little bit better. I like our level of intensity (in the second half), our guts and grit.”

“It is pretty nice. I think this group definitely deserved it,” Foolkes said. “We were close the last couple of seasons.

“I am really proud of the guys. Now that we got that out of the way, we can focus on St. Thomas More next week and get ready for the playoffs.”

With the score tied 2-2 in the 75th minute, the Bucs were handed a yellow card. Ethan Paiz launched the free kick from 40 yards out, and Kaleb Lirette was able to head it past Bucs keeper Reed Boyd, who finished with six saves.

“We haven’t scored off many of them this year like we have in years past,” Foolkes said of set plays. “That has been our bread and butter — free kicks and corner kicks. We were definitely overdue for one. What a time to get one.”

Robert Campos scored on a breakaway to give the Tors a two-goal lead with 3 minutes left.

Barbe outshot the Tors 6-3 in the first half but struggled to mount an attack in the final 40 minutes with pressure from the Tors, and didn’t get a shot on goal in the second half.

“I think we had maybe one, and we didn’t make the right decision when we passed out,” Barbe head coach Todd Hoffpauir said. “They put a lot of pressure on us in the second half.

“I knew it was coming, but we just couldn’t think quick enough to actually find our outlets and sustain our attack. They did a great job putting us under a lot of pressure. They are a good team.”

The Tors got their first goal in the 54th minute when Lirette redirected a throw-in from Paiz to Gorka Pascual, who cut the Bucs’ lead to one. Nine minutes later, the Tors got the equalizer from Ostin Duncan, who scored on a kickback by Campos.

Barbe got a quick-strike goal in the second minute from Joe Osorio and added another right before halftime by Ashimito Goswami.

“We did a good job of keeping our defensive shape (in the first half),” Hoffpauir said. “When we were able to counter out, we actually found the correct pass and it enabled us to get a few opportunities.”