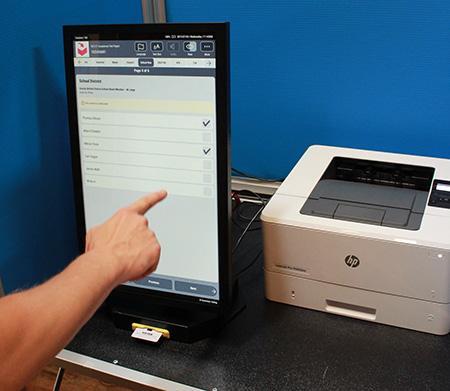 Louisiana is getting ready for the third time to buy new voting machines under a new state law. The options for voters are varied and one of them is ballot marking devices like the one shown here.smcacre.org

A new 2021 voting law requires that Louisiana use a voting system that creates some kind of paper trail, which helps improve the election process. Unfortunately, some conservatives want to go back to using strictly paper ballots, which is a terrible idea.

Louisiana is currently making a third effort to buy new voting machines and the work is being overseen by a Voting System Commission created by that new law. State Sen. Sharon Hewitt, R-Slidell, author of the law, said it is an effort to insert transparency into the voting machine purchase.

The first effort to buy new machines was halted after losing bidders claimed the bid specifications favored Dominion Voting Systems, the winning bidder. Dominion has been unfairly targeted by conspiracy theorists. Republican Secretary of State Kyle Ardoin canceled the second bid process after he was accused of favoring Dominion.

The effort to go back to strictly paper ballots is being pushed by those who continue to spread former President Donald Trump’s baseless allegations that the 2020 presidential election was stolen from him.

Lenar Whitney, a former state representative from Houma, told the Voting Commission that machines shouldn’t be used. Whitney, an ultra-conservative, said a hand-marked paper ballot is the only way to guarantee an election is fair.

In my early newspaper career, someone explained to me how paper ballots could be used to manipulate an election. A voter goes into the voting booth, puts the unmarked ballot in his pocket, drops something else in the ballot box and takes his unmarked ballot with him.

That ballot is then filled out, given to another voter to deposit in the box and that voter brings his unfilled ballot out the door to be filled out for another voter.

Legislators and election officials at the second meeting of the Voting System Commission said paper ballots can also be lost, stolen, or altered. Voting precincts have different issues on the ballot and the printing of those precinct ballots can be time-consuming, expensive and create the need for additional personnel at the polls.

A Tangipahoa Parish resident urged those on the commission not to repeat the unfounded claims and misinformation about the 2020 presidential election. Repeat a lie often enough and people will begin to believe it, he said.

Louisiana should have purchased new voting machines a long time ago. The new commission needs to ensure the process begins as early as possible.

The commission will review all of the voting systems of companies that are interested in bidding during public hearings. Its members will then recommend a vendor to Ardoin, who will request a bid from the company.

There are two popular voting machines. The optical scanner has voters mark their choices on paper, which is then fed through a scanner to count the votes. Direct-recording electronic machines let the voter use a touch screen to select his choices before casting the vote.

Voters who are disabled use ballot marking devices that let them cast their votes on a screen, check their votes and then the paper record is fed through a scanner.

The National Conference of State Legislatures reports that 14 states require paper ballots, 17 states and the District of Columbia require a voter-verifiable paper record for voting machines, 6 states require voting machines to have a permanent paper record, 13 states don’t require a paper trail, 3 have some jurisdictions with a paper trail and others without, and Louisiana uses the same equipment throughout the state with no paper trail.

What Louisiana will do about new voting machines is unknown at the moment. However, Hewitt’s legislation wiped out a choice of electronic voting machines.

Louisiana is currently using old machines, but they are direct-recording electronic machines that are described as “the newest kind of system in use in the U.S.” However, this state’s machines don’t have the paper trail that many voters want and the word “electronic” seems to have some voters and legislators running scared.

A direct-recording electronic machine that leaves a paper trail is the better choice, but Louisiana voters apparently won’t have that choice. If that’s true, let us use those ballot marking devices that are the next best thing.