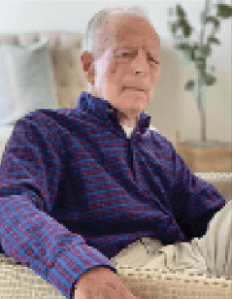 Mr. David was born on Dec. 20, 1935 in Prairie Ronde, La.  He was raised in Opelousas where he was a 1954 graduate of Academy of Immaculate Conception  Catholic School.  Following graduation, he joined the Air Force and served five years in Sondrean, Greenland before being honorably discharged.  He then began his 35-year banking career as branch manager for Gulf National Bank/Premier Bank and retired from Bank One in 1999.  Mr. David was active in his community having served as President for Bankers of America, American Institute of Banking, Optimist Club, and Credit Executive Institute.

He was most proud of his grandchildren who he enjoyed spending cherished moments with.  In his spare time, he also liked to keep his yard manicured.

He was preceded in death by his loving wife of 35 years, Patricia Kaye David; parents, Volta and Jeffery David Sr.; and siblings, Warren David and Ludy Latiolais.

A funeral mass will be held at 11 a.m. on Monday, Jan. 24, 2022 at St. Martin de Porres Catholic Church.  Monsignor Daniel Torres will officiate.  Burial will follow in Consolata Cemetery under the direction of Johnson Funeral Home.  Visitation will begin in the church from 10 a.m. until the start of the service with a rosary being recited at 10:30 a.m.