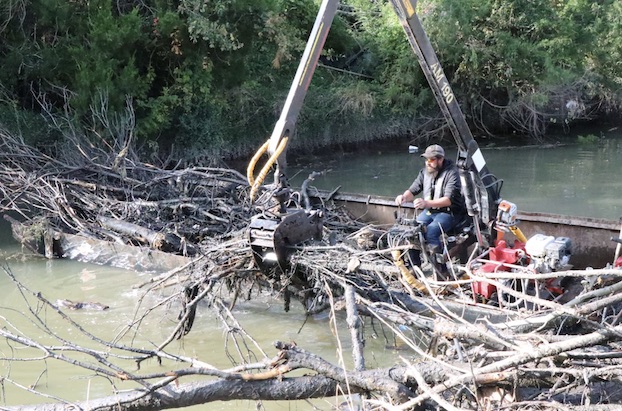 A crane picks up vegetative debris that Hurricanes Laura and Delta left scattered in drainage laterals throughout Calcasieu Parish. (Special to the American Press)

A shipping truck parked near Indian Bayou in Moss Bluff uses a crane to pick up a pile of vegetative debris from a barge. It is one of several drop-off sites being used to collect and haul off massive amounts of debris that Hurricanes Laura and Delta left scattered in drainage laterals throughout Calcasieu Parish nearly two years earlier.

Three months have passed since CrowderGulf began the daunting task of clearing hurricane-related debris from more than 1,300 miles of drainage laterals parishwide. Jade Miller, an engineer with the Calcasieu Public Works department, said an estimated 480,000 cubic yards of debris have been removed so far, with roughly $40 million spent.

Brian Smallwood is the regional manager for CrowderGulf, a company the parish brought in to collect roadside debris after Hurricanes Laura and Delta. While the goal of removing debris from the laterals is simple, accessing them is sometimes a challenge. Vegetation, such as downed trees, makes up 99 percent of the debris removed from the laterals, he said.

“I could walk on top of the trees straight down some of these ditches because there’s so many trees down,” Smallwood said.

The parish is seeking 90 percent reimbursement from FEMA for the entire project, with the Police Jury and the parish’s two drainage districts covering the remaining 10 percent. To ensure the parish receives that reimbursement, Tetra Tech is monitoring the debris CrowderGulf collects to make sure it is related to Hurricanes Laura and Delta.

“There are areas where if we wouldn’t have had assistance from the federal government and been able to do this project, you could have never sustained that area again,” Miller said.

The project is broken up into phases, with the higher priority and larger watersheds being addressed first, Miller said. Crews already finished Phase 1A, which covered the Lake Charles area, including Contraband and English bayous. Phase 1B covers the Moss Bluff area, including West Fork and Indian Bayou, and is about halfway complete, he said. Work on Phase 1C, which includes the southern part of DeQuincy and the northern part of Sulphur, should start soon, Miller said.

“We’ve got a lot of calls from citizens that we’re predominantly on the east side of the (Calcasieu) River,” Miller said. “Starting now, we’re getting on the west side of the river. We’re going to get to everybody, but you’ve got to start somewhere.”

There are six debris drop-off sites by water and a dozen by land, Smallwood said. The land-based sites use excavators to remove the debris. Only damaged or destroyed trees or ones causing hazards are removed. Stumps are left to stabilize the soil.

Trucks then haul the debris to a management site, where it is ground up and eventually brought to a final disposal site. That site could be a property owner for beneficial use, or a landfill.

“This is happening seven days a week,” Smallwood said. “Our incentive is to do this as fast as possible.”

Miller said payments are based on how many yards of debris are collected and removed, rather than an hourly or daily rate.

Miller said the parish receives plenty of calls from residents asking to dig out their ditches. He said this work deals strictly with hurricane recovery.

“Some people don’t fully understand the scope of the work,” he said. “CrowderGulf is not removing any sediment or making ditches bigger or wider. This project will help drainage, but to call it a drainage project is a misconception.”

“Every once in a while, we’ll get mattresses or refrigerators,” he said. “Every lateral is a little different.”

Smallwood said that property owners have to grant access for crews to clear certain laterals. “The parish doesn’t own the laterals, but is responsible for maintaining them,” he said. “We have to reach out to property owners and say, ‘Hey, we’re going to clean this ditch for you.’ Nine out of 10 are appreciative and helpful. The thing is, you’re doing them a free service.”

Miller said there is a fine line in staying ahead of the work and coordinating funding.

“There’s no way of us saying when we’re getting to future phases,” he said. “We don’t want to get too far out in front. CrowderGulf is working as fast as they can, and that’s all you can ask them to do.”

Miller and Smallwood said while the project is massive, work is moving along.

“We feel we’re on task and on a good timeline,” Miller said. “We’re pleased with the progress.”