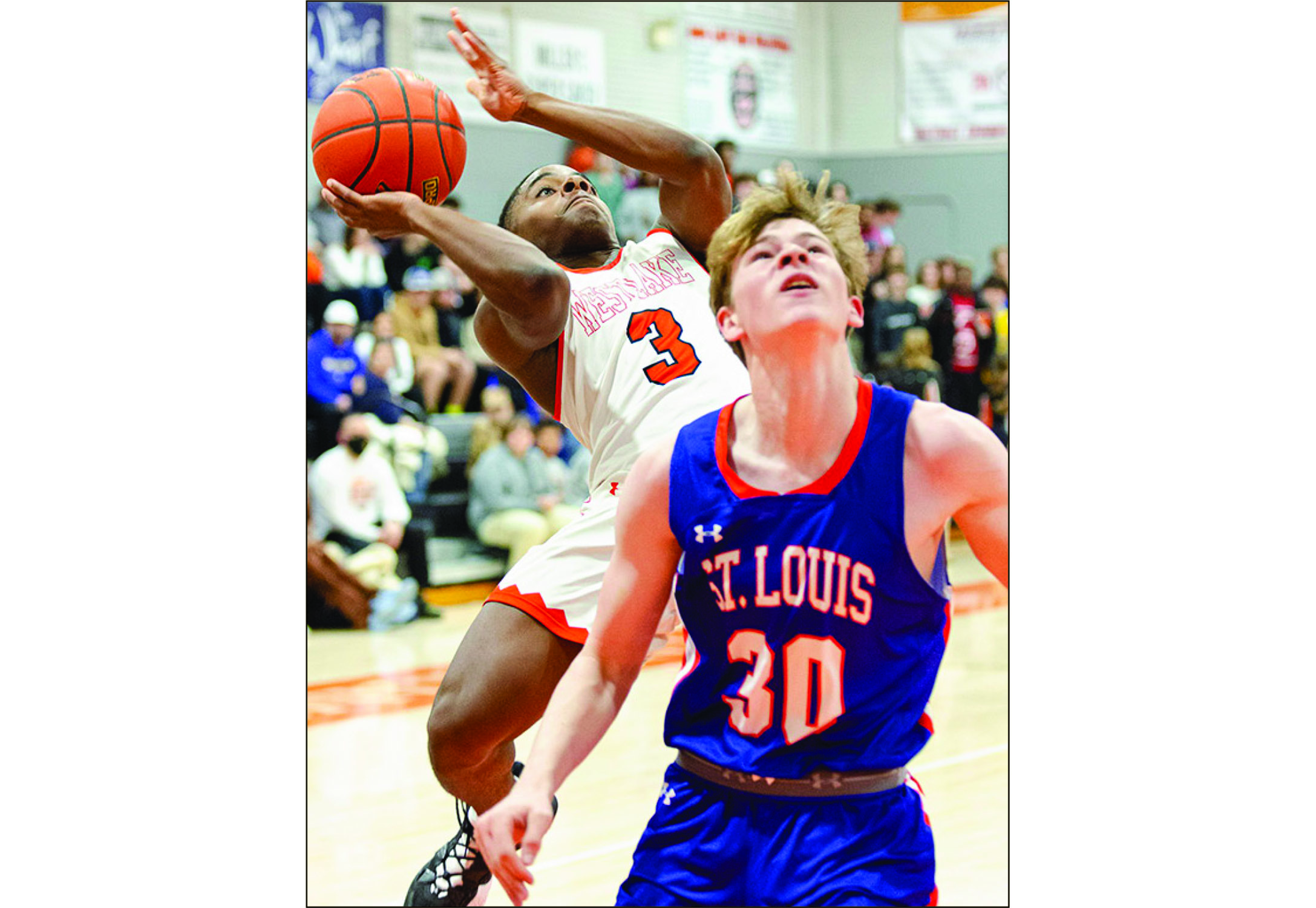 WESTLAKE — The Westlake Rams were in a tight spot Friday night.

They trailed St. Louis Catholic by four points with just over 2 minutes left and in danger of starting District 4-3A play 0-2. But senior guard Jamaal Guillory willed the Rams to a 52-48 win with some late clutch plays.

With 2:06 left, Guillory rebounded his own miss for a bucket and made a free throw to cut the Saints’ lead to 46-45.

Seconds later, he forced a turnover on a jump ball and set up Kevin Rideau for the go-ahead 3-pointer. Then he closed out the game with four consecutive free throws. Guillory finished with a game-high 22 points, including 12 in the fourth quarter.

“That was big clutch,” Westlake head coach Doug Morris said. “It was four in a row that he knocked down to win the ball game.

“I expect him to knock down free throws at the end. We just started making a few baskets and got back into the game. It

was just a good game. They are a good basketball team, and it was a battle tonight.”

The Rams’ high-scoring offense (68 ppg) struggled in the first half and trailed the Saints (12-8, 1-1) by six at the break with nine first-half turnovers.

“We had 18 points at halftime, and St. Louis did a good job on defense. We missed a lot of buckets at the rim or I think we would have been a lot better in the first half.”

Westlake (16-2, 1-1) held the Saints to eight points in the third quarter to keep them from pulling away.

“That is what we talked about,” Morris said. “We have to be better on defense at halftime. We knew the buckets would start falling for us.

“They don’t get easier. Our district is really tough. It will be a battle every night we play.”

The Saints took their largest lead of the first half, 24-18, on a pair of free throws by Mika Ducote with 1:26 left in the second quarter.

St. Louis’ Bryson Hardy’s 3 with 15 seconds left in the third quarter put the Saints up 32-29, but Guillory responded with a three-point play.

St. Louis battled back from a five-point deficit with 4:52 left in the game on a 3 by Bennett McEleeven and four consecutive free throws by Ducote.

The Saints had a chance to pull away after taking a 46-42 lead with 2:19 left before Guillory’s rally and turned the ball over with 4 seconds remaining, down by two points.

Hardy led the Saints with 17 points and McEleeven finished with 11.