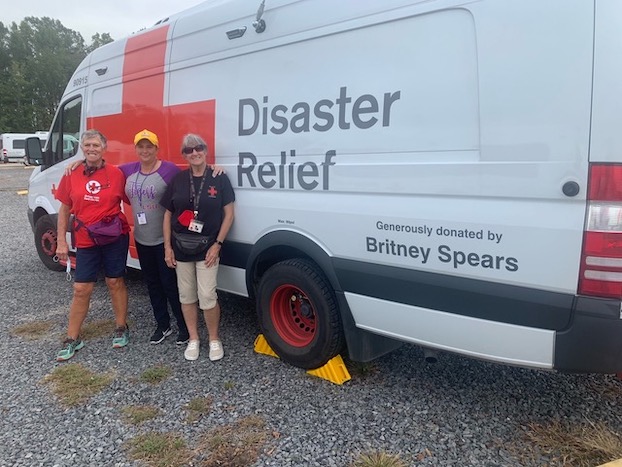 American Red Cross volunteer Cora Lee, far left, says driving the Britney Spears-donated ERV across the U.S. to help those in need has been the most rewarding work of her life. (Special to the American Press)

In honor of Martin Luther King Day, a nationally designated Day of Service, the American Red Cross is encouraging others to consider volunteering their time to help others in need.

Volunteer Cora Lee has been providing aid through the Red Cross for a decade, and at 70 years old she said she has never experienced such rewarding work.

“To see the expressions on the faces of people in need when you offer them a warm blanket or some food, there is nothing more fulfilling in life. It is the most rewarding experience I have ever felt,” Lee said.

Lee has been a trailblazer in her own time. After nearly 20 years working inside operations at Bellsouth, she was moved to outdoor operations and became the first female lineman on her crew. The men were skeptical, she admits, but she proved she could hold her own and earned their respect. Later, she added cancer survivor to her list of accomplishments.

“I look at volunteering as my way of giving back,” Lee said.

Lee first became involved with the Red Cross after a chance meeting with volunteers in the aftermath of Hurricane Rita. She had been deployed as a lineman to assist with recovery efforts when she happened across volunteers feeding members of the local community from their Emergency Response Vehicle (ERV).

“These two gray-haired women kept trying to offer me food and I kept telling them, ‘No, no. I’m fine, I can buy my own food.’ But they eventually convinced me to take a banana and we began to talk. Watching them help the people in that community showed me exactly what I wanted to do when I retired,” Lee recalled.

Over the past 10 years, Lee has helped in all aspects of work through the Red Cross. She has volunteered in shelters and she has handled logistics involved with transporting people, but her favorite of all the positions is driving the ERV.

She now has the distinction of driving the ERV donated by Louisiana’s own music icon Britney Spears, and she said that alone has gotten her more attention than anything else.

“It’s funny. Truly, I have gotten thousands of requests from people who just want to take a picture in front of the ERV. Everywhere I go in it, I get immediate attention. People won’t remember me, but they always remember Britney,” she said.

The past two years have been a struggle, Lee said, as COVID has altered how she is able to offer aid through the organization. Lee has learned to provide assistance virtually to those in need and has not let the pandemic damper her burning desire to help others, but she said she cannot wait to be able to return to the front lines to help people.

“There’s a memory I’ll never forget; I still get emotional about it. I responded to a home fire in Zachary that destroyed the home of a woman and her three children. When I got there, the mother was standing there with one child next to her, another in her arms and the third clinging to her leg. The mom was looking around and crying and said she didn’t know what to do. I wrapped her in a blanket and told her that we were going to take care of them, and then I got to work at getting them in a hotel. Being able to offer her help and relief in that moment stays with me, and it fuels me to keep volunteering,” Lee said.

For anyone considering volunteer work with the Red Cross, Lee said she would tell anyone to do it and see the immediate impact that they make in the lives of others.

“It’s the little things that impact so many people. Just handing out blankets or giving someone food, those small acts resonate deeply with the people who receive them and that is the greatest reward.”