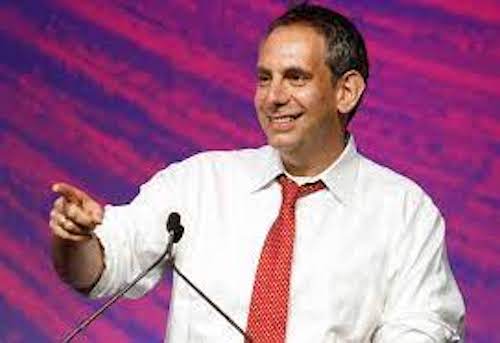 Dave Isay has come up with "One Small Step," a procedure that has the potential to heal a divided United States. Here is his plan.kuow.org

Robert Love, the editor-in-chief of the AARP magazine, in its  December/January issue asked some important questions.

“Why are we Americans so angry with one another?” he asked. “Why do fistfights break out on airplanes, at restaurants, in stores and at school board meetings? Why are road rage shootings on the rise?”

Dave Isay is his name and he founded StoryCorps, an oral history project, 18 years ago. It has taped more than half a million Americans telling their stories and has become the largest single collection of human voices ever recorded.

Norah O’Donnell is anchor of the CBS Evening News, and she interviewed Isay Sunday on “60 Minutes.” She said he is attempting to bridge the country’s split down the middle.

“What if we just give the entire country the chance to be listened to and have a chance to talk about, you know, who they are?” Isay said.

O’Donnell then asked, “Do you think part of the problem we’re having in America is that people are so angry because they don’t feel like anybody’s listening to them?”

Isay said he thinks people feel misunderstood and judged. “But, you know, many minds have been changed by being listened to, by conversation, being told that they’re loved,” he said.

O’Donnell said, “Something that we would all consider maybe so simple is so powerful.”

Isay said, “Yeah, being told that all of our stories matter equally and infinitely is — you know, is something everyone needs to hear.”

In order to do that, Isay has created One Small Step that he hopes can help end what he calls the “culture of contempt” that is tearing the country apart. He said the situation is so bad that if the culture of contempt wins, things are just not going to end well for the United States.

“It’s media. It’s social media,” he said. “I mean, there’s a multi-multi-multi-billion dollar hate industrial complex, where people — you know, can make money by making us hate and fear each other. It’s a little bit of a David and Goliath fight here.”

Isay started StoryCorps in 2003, which he called a very simple idea. He said, “You come to the conversation booth with your grandmother, with anyone who you wanna honor by listening to them. So people think of it as, ‘If I had 40 minutes left to live, what would I say to this person who means so much to me?”

StoryCorps rolled out a mobile booth in 2005 to travel the country and launched partnerships and story collection programs in multiple American cities. The interviews have become an important collection at the Library of Congress.

Isay said about the time of the 2016 presidential election he got the idea for One Small Step, a new kind of StoryCorps that could perhaps help unite a country that is becoming increasingly divided.

One Small Step matches strangers who disagree politically to put them face-to-face for 50 minutes. It’s not to talk about politics, it’s just to talk about their lives. Facilitators begin by asking the participants to read one another’s biography out loud.

The project tries to match people who may be from different political parties but have something in common. Participants are encouraged to focus on what they share.

The format is derived from a psychological concept developed in the 1950s called contact theory. Isay said when you have two people who are enemies and you put them face-to-face under very, very specific conditions — and they have a conversation and a kind of visceral emotional experience with each other, that hate can melt away. And people see each other in a new way.

One Small Step just crossed the not so small milestone of completing 1,000 sessions and there are over 6,000 people on the waiting list. O’Donnell said it’s going to take a lot of stories to bring this country together.

Isay said, “We’re banking on a bit of a miracle here. You just don’t give up.”

For those of us who love this country and are heartbroken over the divisions, let’s pray that we witness that miracle.