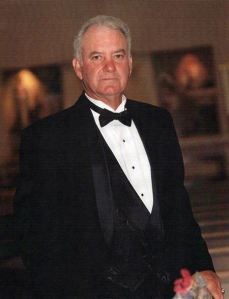 Sam was born July 7, 1938 in Lake Charles, La.  He was a loving father, grandfather and companion.  He is most known in Allen Parish as the Golf Pro at the Oberlin Country Club for many years.  He made friends instantly with his easy-going nature and great sense of humor.  He later was sought out to manage other Country Clubs including Chicot State Park Country Club in Ville Platte, Rapides Country Club in Alexandria and Tioga Country Club.  After retiring from managing Country Clubs and golf courses, he enjoyed cutting grass so much that he continued to cut grass throughout his neighborhood and for friends for exercise.  He loved the outdoors, especially hunting, fishing and crabbing.  He made annual trips to a hunting club in Mississippi with dear friends that brought back lots of deer meat as well as large bass. Many people also shared stories about his softball glory days as a fastball pitcher, that he was an outstanding player that they loved to watch. Sam enjoyed playing cards with his friends, Frisbee with his dog, Tiny, and could often be found on the golf cart with his dog, C’est Tu.  The lights of his life were his two daughters and their two children.  He attended every event he could as a proud grandfather.

Sam chose to make his eternal resting place at a family cemetery, ironically built next to the grounds of a Country Club, where he can spend eternity on a Golf Course.  Sam will be greatly missed by all who knew and loved him.

Those left to cherish Sam’s memory include his two daughters, Melissa Welch and husband Andy of Oakdale, La., and Suzette Leonards and husband James of Crowley, La.; two grandchildren, Macy Welch and Seth Leonards; mother of his children, Dolores Benoit; and especially, his best friend and companion, Brenda Mills of Kinder.

His funeral service will be held at 2 p.m. on Friday, Jan. 14, 2022 at University Baptist Church.  Father Levi Thompson will officiate.  Burial will follow in Burleson-Duhon Cemetery, under the direction of Johnson Funeral Home.  Visitation will be at the church on Friday from 10:30 a.m. until 2 p.m., with a rosary at 12:30 p.m.

The family would like to say a special thanks to his “angel” caregiver, Rachael Simmons who cared for him as a family member.  Also, a special thanks to Allegiance Home Healthcare, especially Scarlet, Amy and Jaime, for all of their love, care and compassion shown.