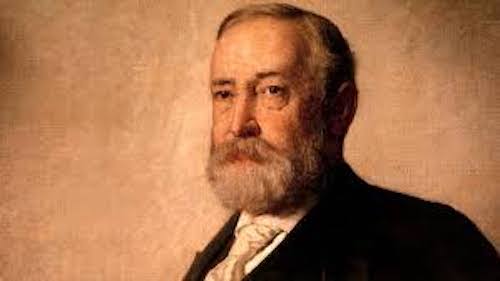 Rutherford B. Hayes of Ohio became president in 1876, which became one of the most controversial elections in U.S. history.history.com

The United States has had some unusual presidential elections in its history, but none that became as violent as the one after the 2020 election. That is why the insurrection on Jan. 6, 2021, that tried to stop the electoral vote count at the U.S. Capitol will become an historical date.

When citizens cast votes for president, they aren’t actually voting for candidates. They are voting for electors who are pledged to vote for the candidate they choose.

It’s not a perfect system, but delegates to the 1787 constitutional convention thought voters in the 18th century in rural areas couldn’t be fully informed about the candidates. Others feared a headstrong “democratic mob” might steer the country astray or a populist president might become too powerful, according to history.com.

The electoral college system has been particularly unpopular when losing candidates had more popular votes than the winner. It has happened five times.

One of the most unusual elections came in 1824. The four candidates were John Quincy Adams, Andrew Jackson, William H. Crawford, and Henry Clay. Jackson got 99 electoral votes, a plurality but not a majority, Adams 84, Crawford 41, and Clay 37.

The 12th Amendment to the Constitution said the House of Representatives had to choose a president from the three highest names on the list. Each state had one vote and a majority of the states (13) was necessary for a choice.

Republicans nominated Gov. Rutherford B. Hayes of Ohio for president in 1876. The Democrats nominated Gov. Samuel J. Tilden of New York. One report called the election the most exciting in the country’s history.

It appeared Tilden had been elected because he had 184 electoral votes, only one less than the majority necessary. Hayes had 165 electoral votes, but 20 votes were in dispute. Louisiana, South Carolina, and Florida sent a double set of returns to Washington, D.C.

An electoral commission was created to determine which of the disputed returns should be accepted. The commission was finally made up of eight Republicans and seven Democrats.

The commission decided to count the Hayes votes and he was declared the winner by a single vote. Tilden had received 4.3 million popular votes and Hayes only 4.0 million. However, the final electoral vote was 185 for Hayes and 184 for Tilden.

Benjamin Harrison, a U.S. senator from Indiana, was the Republican candidate in 1888. President Grover Cleveland was the Democratic nominee seeking a second term. It wasn’t even close with Harrison winning with 233 electoral votes to 168 for Cleveland. However, Cleveland had more than 100,000 more popular votes than Harrison.

It was another 112 years before the winner of the popular vote also lost the election. George W. Bush was the Republican candidate in 2000, and Al Gore was the Democratic candidate. Votes in Florida ended up deciding the election.

A recount was necessary there because of the close vote. Bush was eventually called the winner by 537 votes, but Gore filed a lawsuit. The Florida Supreme Court sided with Gore, but Bush appealed to the U.S. Supreme Court. The high court voted 5 to 4 to reverse the Florida court’s decision and halted another recount.

Bush won the electoral college vote 271 to 266. Each candidate got over 50 million votes, and Gore had 542,520 more popular votes than Bush.

Republican Donald Trump was the surprise winner in 2016 even though Democrat Hillary Clinton received 2.8 million more popular votes than Trump. The electoral vote was 304 for Trump and 227 for Clinton.

Every time the loser has had more popular votes than the winner, and even after other presidential elections there have been calls for eliminating the electoral college vote in favor of making the popular vote winner the president.

The National Popular Vote Bill would do that, and it has been enacted into law by 15 states and the District of Columbia that have 195 electoral votes. It needs an additional 75 electoral votes to have the 270 needed to go into effect.

When a state approves the bill, it pledges that all of its electoral votes will be given to whichever presidential candidate wins the popular vote nationwide. How well that system might work continues to be a controversial issue.