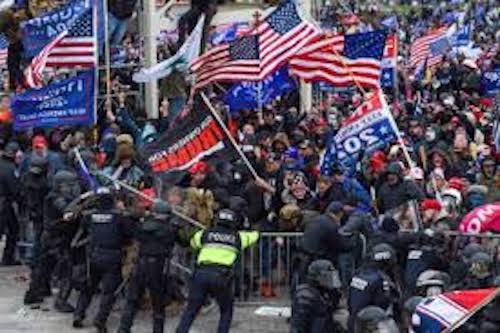 Americans will get the full story of the Jan. 6 insurrection at the U.S. Capitol when public hearings begin.FactCheck.org

The fact that the U.S. House of Representatives is investigating the insurrection that occurred at the U.S. Capitol a year ago today isn’t unusual. The American people deserve to know exactly what happened, and they have always gotten the full story of previous attacks at the Capitol.

When the special House committee’s publicly televised hearings begin, citizens will hear what 300 witnesses have said that is backed up by 35,000 pages of records so far that include texts, emails and phone records from people close to former President Donald Trump. About 90 percent of the witnesses have cooperated.

As The Associated Press reported, “Video cameras captured the violence live, with rioters clubbing officers with flag poles and fire extinguishers, even squeezing one between doors as he begged for his life.” More than 100 law enforcement personnel were injured and four who were there that day later took their own lives.

Despite what Americans have seen on news reports, a recent poll shows that only about 4 in 10 Republicans recall the attack by supporters of Trump as very violent or extremely violent.

The poll by the AP-NORC Center for Public Affairs also shows that about 3 in 10 Republicans say the attack wasn’t violent and about another 3 in 10 say it was somewhat violent.

U.S. Rep. Bennie Thompson, D-Miss., chairman of the special House committee, said the panel wants to show the insurrection was “an organized effort to change the outcome of the election by bringing people to Washington … and ultimately if all else failed, weaponize the people who came by sending them to the Capitol.”

We haven’t heard much about a similar event at the Capitol on Feb. 13, 1861, after Abraham Lincoln was elected. An Apple podcast, “The Capitol Attack of 1861,” said there had been threats that electoral votes were going to be counted that day and it was going to get violent because pro-slavery citizens felt Lincoln would be a threat to their way of life. Their goal was to stop the electoral count.

Ted Widmer, a distinguished lecturer at City University of New York, said Gen. Winfield Scott, commander of the U.S. Army in 1861, was from Virginia and near retirement, but he smelled treason in the air. Scott placed armed troops at the Capitol.

“I shall consider myself responsible for (Lincoln’s) safety,” Scott said. “If necessary, I shall plant cannon at both ends of Pennsylvania Avenue, and if any of the Maryland or Virginia gentlemen who have become so threatening and troublesome show their heads or even venture to raise a finger, I shall blow them to hell.”

The electoral count was done without incident. The pro-slavery crowd stayed around drinking, but no one was arrested.

Those on the current investigating committee said they hope to fill in the blanks about the preparations before the Jan. 6 attack, the financing behind the rally that preceded it and the extensive White House campaign to overturn the 2020 election. They also want to investigate what Trump was doing as his supporters fought their way into the Capitol.

U.S. Rep. Liz Cheney of Wyoming, vice chairman and one of two Republicans on the committee, said the full picture is coming to light.

Cheney doesn’t have much credibility with many Republicans, but she has been courageous about fulfilling her congressional duties.

Rep. Pete Aguilar, D-Calif., said the biggest challenges for the committee are the calendar and the small group of Trump loyalists who are trying to run out the clock by stonewalling or suing them.

If Republicans take over the House in November, they are certain to end this investigation.

Rep. Adam Kinzinger of Illinois, the other Republican on the committee, said, “I think in five or 10 years, when school kids learn about Jan. 6, they’re going to get the accurate story. And I think that’s going to be dependent on what we do here.”

It is also encouraging to know that about two-thirds of Americans described the Jan. 6 insurrection as “very violent” or “extremely violent.”

We can expect the committee’s public hearings to be watched by many Americans on both sides of this disturbing attack on democracy.