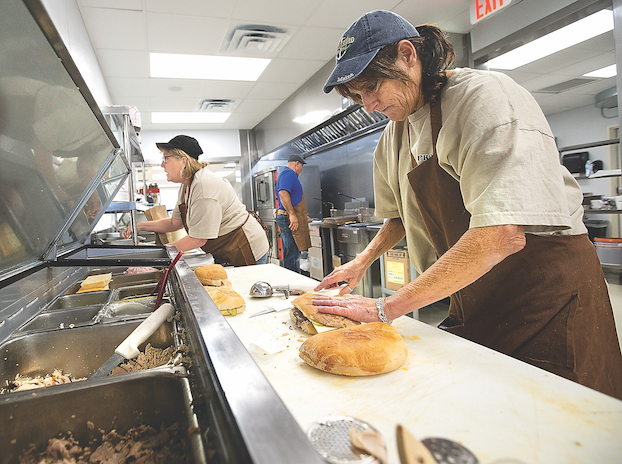 Customers showed up in droves. Around lunchtime, the completely renovated dining room was filled to capacity, and cars in the drive-thru line stretched around the parking lot. Owner Leroy Pronia Sr., 84, was busy working the cash register.

Bryan Bergeron held back tears while describing what it meant for Pronia’s to be back in business after being closed for more than a year. Bergeron runs the bakery business alongside his daughters, Jilleen and Jessica. He is married to Jill Pronia, the daughter of Leroy Sr.

“It’s been a long time coming,” Bergeron said. “I thank God for bringing us through this.”

After retiring, Leroy and Annette Pronia opened Pronia’s Deli and Bakery at 3101 Kirkman St. in 1989. The two formerly owned and operated Pronia’s Landscaping and Horticulture Service and Pronia’s Flower Shop. Annette died in February 2020 at the age of 80.

Bergeron said the business initially opened as a New Orleans-style muffaletta shop. Over the years, the menu gradually expanded, and the bakery began serving a variety of cakes, including wedding and Mardi Gras king cakes.

The renovated business has a completely new look, with the bakery and deli now combined in one location. Hurricane Laura ripped the roof off the deli and bakery, requiring it to be completely gutted, Bergeron said.

“Everything was brought down to nothing and brought back up,” he said. “We’ve got new plumbing, electrical, flooding, ceiling and new equipment.”

There were some initial issues on opening day, with the new cash registers not working properly, Bergeron said. However, the customers didn’t seem to mind, he said.

“We’ve had a great response,” he said. “They’ve been very patient with us. Everything is selling.”

Barbara Roberson said she first fell in love with Pronia’s champagne cake four years ago after her daughter, Sadie, graduated from McNeese State University with a criminal justice degree. On Monday, she purchased a smaller cake and planned to get a larger one later in the week.

“I just won’t share it,” Roberson, said jokingly. “I’m celebrating myself because I love these cakes.”

A 62-year-old Lake Charles native, Roberson said she had repeatedly called Pronia’s for weeks, asking when they would open. She intended to get a champagne cake for Sadie in time for Christmas. Because the business was still closed, she made a red velvet cake instead.

Roberson said her home was largely spared of major damage from Hurricane Laura. She said having locally-owned businesses back open is another step in the region’s recovery.

“This place is really popular,” she said. “I mean, it’s awesome. I know I’m not the only one who feels this way.”