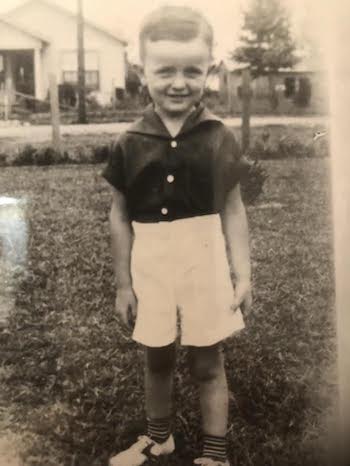 Jim Beam is all dressed up for church in the late 1930s, and talks here about his faith.

When I wrote about the different families in my life last week, I forgot to mention one of the most important ones — my church family. I have been going to church regularly since I was 6 or 7 years old.

My older brother, my younger sister and I got dressed for church every Sunday. A great aunt — a school teacher we called Aunt Tassie — picked us up every week and took us downtown to First Methodist Church on Broad Street.

My mother, Carrie Welch Beam, who was a major influence in my life, never learned to drive, and my dad wasn’t a regular churchgoer.  I assume that’s why someone else took us to church, but we never asked. We usually sat up front and listened to the Rev. J. Henry Bowdon Sr.

On Sept. 28, 1947, when I was almost 14, University Methodist Church opened on Patrick Street and my family became charter members. That is where I met many of the friends I would cherish for a lifetime. It is also where I was the janitor for three years while attending McNeese State University.

I had a regular routine every Sunday. After church and lunch, I walked from 902 16th St. where we lived to see a movie downtown. After the movie, I walked from downtown to church in order to attend Methodist Youth Fellowship, where my faith was strengthened every week.

The Rev. William O. “Bill” Byrd served as the first pastor from 1947 to 1951. It was a time when illegal gambling was tearing away at the moral fiber of Calcasieu Parish. Byrd and G.G. “Buck” Buchanan, a church member, were in the forefront of an organized citizens’ effort in 1951 and 1952 to put an end to wide-open gambling.

The crusade succeeded, and when Calcasieu Parish Sheriff Henry A. “Ham” Reid Jr. nearly lost his re-election bid in 1952, he realized the people had spoken loud and clear on gambling and he closed it down.

The role that Rev. Byrd and other religious leaders played in the anti-gambling fight strengthened my faith even more. Byrd was another major influence in my life, and we were friends until he died.

Church leaders at the time practiced what Irish philosopher Edmund Burke said on Jan. 9, 1795 — “The only thing necessary for the triumph of evil is for good men to do nothing.”

Jo Ann, my late wife, and I were married Aug. 20, 1954. Jo Ann was a Baptist, but she apparently knew I wasn’t going to join her church. That is when we joined St. Luke Methodist Church that eventually became St. Luke-Simpson.

Whenever people asked Jo Ann how we became members, she always jokingly told them it was because I wasn’t good enough to be a Baptist.

Jo Ann and I attended regularly. It is at church every Sunday when I miss Jo Ann the most. Some of the great church songs always bring me to tears.

One mistake I made for years was the failure to attend Sunday School. I eventually decided to give it a try and joined a class called The Seekers. That has been another blessing.

It is at Sunday School where you learn more about the Bible, and I got to know a smaller group of some 30 church members better. We share our joys and concerns every week, maintain contact during the week by email and telephone and pray for those who are struggling, for whatever reason.

Some years ago, I spoke to the congregation about Sunday school and what I had missed for too many years.

I thought it was important to talk about my faith today because I believe declining church attendance is another reason why there is so much division and dissension in this country that I find extremely disturbing.

A Lutheran pastor summed it up when she said people have reordered their priorities and worship isn’t one of them.

Amid all of today’s turmoil, I keep asking myself the question Rodney King, a symbol of police brutality, asked some years ago. King wasn’t bitter about his police beating, and the question he kept asking was, “Can we all get along?”

Why can’t we? When Jesus was asked which were the greatest commandments, he said, “Love the Lord your God with all your heart, with all your soul, and with all your mind” and “Love your neighbor as you love yourself.”

We don’t appear to be doing so well on either one of those.

Scooter Hobbs column: Warm bodies will do for LSU