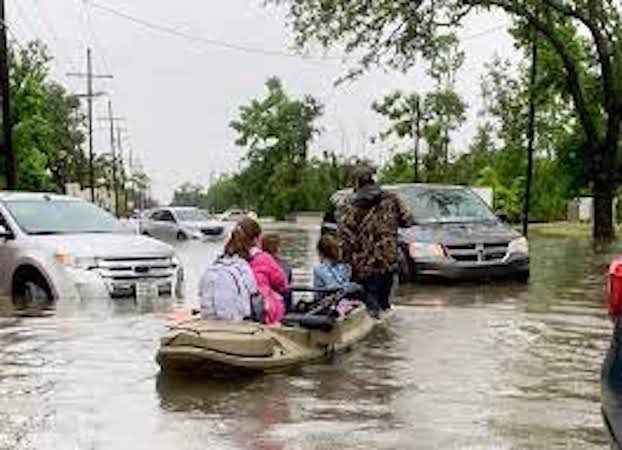 Nick Delgado uses his boat to help a neighbor pick up their kids from schools during heavy rains in Lake Charles on May 17, 2021. (Rick Hickman/ American Press Archives)

Lake Charles residents and business owners were caught off guard as an historic 16-18 inches of rain fell over a six-hour period May 17, causing an unprecedented flash flood.

Local officials said it was the third-highest daily rain event on record, dating back to the mid-1800s. A rain gauge near Contraband Bayou and McNeese Street that recorded 21 inches of rain may have set a “record amount for a one-day rain event” in the parish, one official said.

Dick Gremillion, Calcasieu Parish Office of Emergency Preparedness director, expected at the time for the flooding to impact roughly 3,000 dwellings. That was based on flood insurance claims and damage claims filed online.

During and after the flood, stalled out and abandoned cars were present throughout the city. Some residents who were wrapping up repairs from the destruction caused by Hurricanes Laura and Delta watched helplessly as water inundated their homes.

Videos posted on social media were jarring, including footage of residents stuck inside a flooded KD’s Diner on West Prien Lake Road. Other residents could be seen in boats trying to rescue those stuck in flooded cars or unable to get out of their homes.

No deaths were reported from the flood. At the peak of the storm, roughly 2,600 Entergy Louisiana customers were without power.

Local schools also navigated the challenge, escorting students to safety. At F.K White Middle School, Principal Jose Cobian described the school turning into somewhat of an island as passing cars created wakes and pushed water closer to the campus. He said staff and teachers had to carry students and trudge through floodwater to get them to their parents’ vehicles.

Nearly 50 students were still at F.K. White around 10 p.m. when the flooding receded enough for parents to safely pick up their children, Cobian said. At Brentwood Elementary School, Principal Brandi Gallien said the last student was dropped off to his parents just after 1 a.m. May 18.

The severity of the flash flooding led residents to speak out on the need to improve drainage throughout Southwest Louisiana. Residents mentioned how their homes didn’t flood during Hurricane Harvey in 2017 or Hurricane Delta in October 2020. Another issue revolved around residents not having flood insurance because their homes were not in a flood zone.

The May flood, combined with the ongoing recovery from Hurricanes Laura and Delta, had some residents considering leaving Lake Charles for good.

President Joe Biden called Lake Charles Mayor Nic Hunter two days after the flood and spoke about what help was needed in the community. Hunter said the flood and other federally-declared disasters that have impacted Southwest Louisiana highlighted the need for “a very bold and honest conversation.”

“Climate change is something that is affecting this community,” he said. “I know that phrase can engender a lot of emotions with different people, but it is real and it is happening.”

Kennedy expressed his sympathy for residents and businesses impacted by the flood. He encouraged residents, even those not in flood zones, to get flood insurance. U.S. Sen. Bill Cassidy, R-La., also visited with Hunter in the days after the flood.