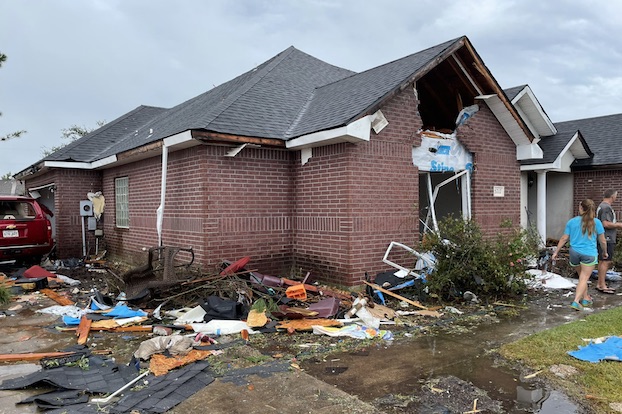 April Pettefer and her daughter, Abigail, sought shelter in a bathroom while a tornado came through their neighborhood in the south Lake Charles area. No one was harmed, including their three cats and one dog. “It really was fast,” she said. (John Guidroz / American Press)

Just when Southwest Louisiana residents thought they had seen every side of Mother Nature’s wrath over the past year, a series of tornadoes touched down in late October and left roughly a dozen homes destroyed.

The tornadoes followed last year’s landfall of Hurricanes Laura and Delta; a severe winter storm in February; and the historic rainfall and flash flooding event in May. Before the tornadoes impacted the area, the Weather Channel had already dubbed Lake Charles the “most weather-battered city” in America.

The series of tornadoes touched down in south Lake Charles near Ham Reid Road and north Lake Charles in Greinwich Terrace. National Weather Service officials in Lake Charles said the squall line that moved from Southeast Texas and across Louisiana eventually led to tornado cells being spotted in Calcasieu, Cameron and southern Beauregard parishes. Wind speeds topped out at 130 miles per hour, with the tornado’s path stretching 2.2 miles long and 300 yards wide.

Immediately after the tornado, Calcasieu Parish Sheriff’s deputies visited homes from Nelson to Ihles roads. Additional patrols were conducted throughout the evening in storm-damaged neighborhoods. No deaths were reported from the tornado, but there were two reported injuries. At the height of the severe weather, Entergy officials reported more than 700 homes without power. Power outages led some schools to dismiss students early.

One day after the tornadoes touched down, an exasperated Gov. John Bel Edwards toured battered neighborhoods around Lake Charles. Speaking at Chennault International Airport, he said withstanding another disaster after enduring four severe weather events was enough to test even the most resilient of people.

Edwards left Lake Charles and headed to Scotland to attend the 26th United Nations Climate Change Conference. He said the frequency of severe weather, including the October tornadoes, is proof that climate change is real and should be addressed.

For residents living in neighborhoods off Ham Reid Road, the tornado’s destruction was inescapable. Homes that were nearly caved in stood next to structures that were largely untouched.

Paul and April Pettefer’s home on Hemlock Street suffered severe damage and was completely split open. The storm also blew out the rear windows of two cars parked in the driveway. The Pettefer family lived in the home for more than 20 years, with the tornado causing far worse damage than the Category 4 Hurricane Laura did after its landfall in August 2020.

April and her daughter, Abigail, took shelter in a bathroom and were unharmed, along with their four pets. Paul was not home when the storm hit. April said the tornado came very quickly and was over once they realized what was happening. The family was fortunate to have purchased another home before the tornado hit.

One house over, Brad Busse watched the storm while on his lunch break. He eventually sought shelter in a center room with his wife, Jessica, and their 16-month-old son, Brandon. The home suffered minimal damage. Busse said his family was lucky that the tornado didn’t cause any catastrophic damage.

Like many in Southwest Louisiana, Busse said the community will continue to work through the damage caused by the recent tornadoes, along with all the other natural disasters that have impacted the community since Hurricane Laura.

“It’s another disaster to go through, so keep throwing them at us (and) we’ll take them and get through them,” he said.