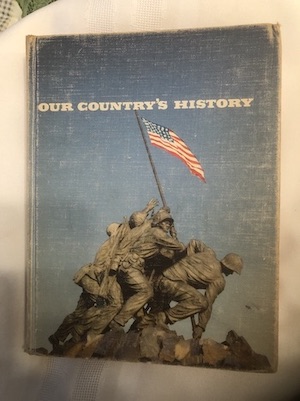 An American history textbook from the 1950s and 1960s may need updating, but most of the facts of history are stilll there.,

Most Americans know this country is equally divided politically, socially and by almost any other measure available. The moderates and compromisers who could heal the wounds that people on both sides are feeling are conspicuously absent.

Moderates are leaving government because they are troubled by the lack of progress and the unwillingness of those who disagree to sit down,  discuss, and try to settle their differences.

It’s a disturbing situation that may be with us for a long, long time because of no apparent solutions. However, I had no idea things were so bad there could actually be a risk of a second Civil War.

Dana Milbank, who is on Twitter, had this message in one of his recent columns: “If you know people still in denial about the crisis of American democracy, kindly remove their heads from the sand long enough to receive this message: A startling new finding by one of the nation’s top authorities on foreign civil wars says we are on the cusp of our own.”

Barbara F. Walter, a political science professor at the University of California at San Diego, is the top authority Milbank is talking about. Walter serves on a CIA advisory panel called the Political Instability Task Force that monitors countries around the world and predicts which of them are most at risk of deteriorating into violence.

Milbank said Walter lays out her bottom line in what he calls a must-read book, “How Civil Wars Start,” which comes out in January. She said the United States has already gone through what the CIA identifies as the first two phases of insurgency.

Only time will tell, she said, whether the final phase, “open insurgency,” began with the sacking of the Capitol by Donald Trump supporters on Jan. 6. Some believe that event was like the firing on Fort Sumpter, the spark that started the Civil War in 1861.

I have my own ideas about why there is so much distrust and dissension in this country. Efforts to try and rewrite our nation’s history tops my list.

Somewhere in my home is an American history medal I received when I graduated in 1951 from LaGrange High School.

I then received a B.A. in social studies from McNeese State University with a minor in English. After serving in the U.S. Army for two years, I began teaching American history at Vinton High School for a half-year and for four years at Marion High School.

While teaching at Marion, I went to summer school at LSU and received a master’s degree in American history in 1962.

Teaching American history was thoroughly enjoyable and the feedback I have received from former students indicates they enjoyed it as well. I still have the two textbooks I used, and, in my mind, the history in them is as good today as it was in the 1950s and 1960s.

Textbooks are always updated, but in recent years there are those in this country that want to rewrite, not update, American history. I understand why statues and other remembrances of military Confederates, mostly in Southern states, are offensive to African-Americans.

Many of those have been removed and we are none the worst for it. However, that doesn’t appear to be enough for some. George Will with the Washington Post writers group talked about the New York Times being “comparably pleased with itself concerning its creation, ‘The 1619 Project,’” which has become a book.

The first enslaved Africans were brought to this country in 1619, and the New York Times Magazine said that date could be considered the beginning of this country. However, the first colony was founded at Jamestown, Va., in 1607.

“Writing history is not like doing physics,” Will said. He said event A cannot have caused event B if B began before A. He quotes Gordon S. Wood, whom he calls today’s foremost scholar of America’s founding and who dissected the 1619 Project’s contentions.

Will said, “The 1619 Project aims to erase (in Wood’s words) ‘the Revolution and the principles that it articulated — liberty, equality and the well-being of ordinary people.’” He added that the goal is to “construct a thoroughly different nation on what progressives hope will be the nation’s thoroughly discredited past.”

Unfortunately, the coronavirus pandemic that refuses to go away has also deprived the people of this country of the stability they need to cope with our turbulent times.

We may not be headed for civil war, but this country is in desperate need of healing.