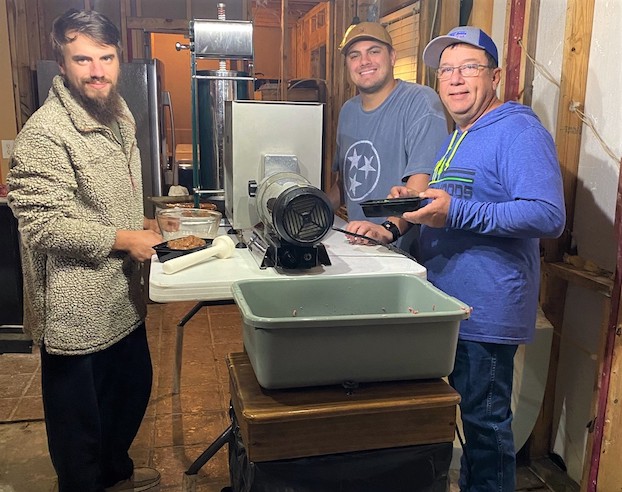 It’s not just breaking bread together that brings folks closer. Cooking together helps create community, too.

“I can’t express what cooking together has done for our membership,” said Danny Dupre, a Knights of Columbus member. “We’re a multinational organization, and we were an aging organization.”

Dupre was named by Kenny Stinson, who was mayor of Vinton for 13 years until Marcus Renfrow took the helm, as his all-time favorite cook.

Dupre said it’s not him, but the team effort of the Vinton Knights of Columbus that makes the organization’s food a winner. When the group comes up with a successful recipe, it sticks with it. No experimenting. No adding a little less of this and a bit more of that because one member in the cooking crew might think it’s a good idea.

“No one even suggests anything like that,” Dupre said.

Frying catfish, preparing jambalaya and other signature dishes has brought together the retired and the young to work together, and it has grown the group and forged community ties. For the past seven years, the Vinton Knights of Columbus has been the go-to group for catering and fundraisers.

“We don’t have a lot of businesses in town,” Dupre said. “We do a lot of fundraisers for Vinton athletics and other youth programs. For the last five or six years we have cooked the jambalaya for the Our Lady’s School Fall Fest fundraiser and we always cook it the same way. It’s not my recipe. It’s the KC’s recipe.”

Dupre’s most recent project was a 70-gallon pot of shrimp gumbo for the Fais do-do fundraiser for St. Joseph’s.

The Knights of Columbus help look out for the welfare of the elderly, especially during the holidays. They have worked with area churches as needed, to provide food. They have cooked for the City of Sulphur and they cook annually for the Louisiana Municipal Association Area G meeting.

“At the end of one of these meetings of mayors in the district, the Mayor of Ville Platte stood up towards the end of the gathering and said the food was ‘Ville Platte good’,” Dupre said. “In my mind, that’s like winning an Oscar.”

The most requested meal of family members is Dupre’s crab stew. The recipe is from his mother, the late Mary Ardoin.

Dupre’s wife, Melanie, doesn’t have to get in the kitchen much at all, he said. One son is following in his dad’s footsteps with a love of cooking that started with a winning 4-H dish demonstration that used a commodity. Another son excels in outdoor cooking.

Dupre’s cooking started at a young age, after he took his first job as a firefighter at 19. Shifts were 24-hours long. He recently retired as the City of Sulphur Fire Chief.

“We learned from each other,” he said.