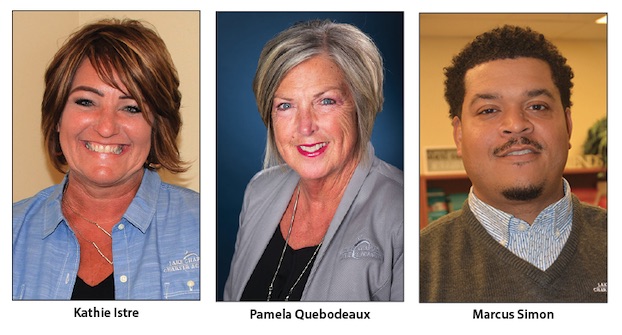 “We have a lot of things that are very similar but some things, too, to improve upon to make it more unified.”

Quebodeaux’s new responsibilities will include overseeing operations and curriculum for the charter schools as well as providing ongoing professional development, training, support and guidance. While she will remain closely tied to LCCA, Quebodeaux said she looks forward to the opportunity to work more closely with SLCA’s principal Kim Lewis and LCCP’s principal Shanice Williams.

“We’re all schools of Choice and we all want to continue to improve and get better. I’m excited about this new opportunity,” she said.

Leadership at LCCA will transition to a co-principal model shared between Kathie Istre, LCCA’s curriculum coordinator since 2011, and Marcus Simon, LCCA’s assistant principal since 2018. Co-principalship is not a common model within the Charter system, Quebodeaux said, but would ensure the pre-kindergarten through eighth grade campus would have a “truly successful” transition.

“We have a very strong leadership team here (LCCA) and these two people have been heavily involved in every decision I’ve made over the past several years. Each has a different skill set they bring to the table and together they will get great things accomplished.”

Istre will be primarily responsible for pre-kindergarten through fourth grade students, accountability and the campus’ curriculum. “I’m excited that the transition won’t feel like a transition. I have strong relationships with the teachers in terms of teaching already and that makes me feel excited for them,” Istre said.

“We’re going to keep doing what we’ve always done, just the structure’s going to change at the top.”

Simon will be responsible for fifth through eighth grade students, marketing, enrollment and extracurricular activities. “Just being able to utilize a lot of the things I’ve learned in the past as an administrator under Dr. Quebodeaux will be nice. I hope to maximize the potential of teachers and students while continuing to grow the school and increase student achievement.”

Quebodeaux said she leaves LCCA with confidence knowing it will be safe in Istre and Simon’s hands. “It makes me feel very comfortable in accepting this new position knowing that school things will still be as we established it and we don’t have staff who are worried about the new leadership because they’re used to them, familiar and trust them… It’s going to be a change but it’s a good change and we’re ready for the challenge.”