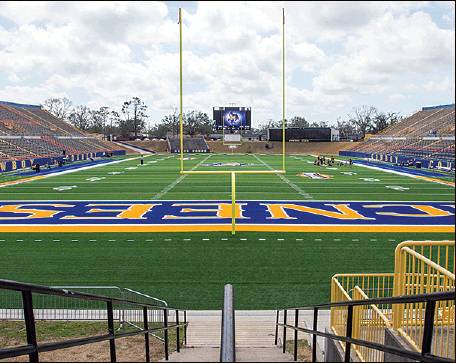 In the northeast corner of the northeast end zone in Cowboy Stadium during games rests a cannon ready to fire after each McNeese State score.

Far too often the last few seasons it has stayed silent.

Even when the Cowboys entered the red zone the cannon was left unlit as the offense misfired in key situations.

Gary Goff promises, starting this fall, that cannon will be firing almost at will.

The freshly minted Cowboys head football coach is known for his up-tempo offense that lights up scoreboards like a living-room Christmas tree.

“Get ready to fire that cannon,” Goff told the crowd at his introduction on Monday. “We will be exciting and we will win.”

If he can do all that, and the Cowboys are back in the playoffs, then Goff will be worth the contract. If not, McNeese might be back at another introductory meeting sooner than expected.

One thing is for sure: Goff will come out firing.

“We will spread the defense out both horizontally and vertically,” he said. “Basically we will take what the defense gives us.”

Running what is known nationally as the Air Raid offense, Goff’s style is to go without a huddle and play fastbreak football. Goff used that attack to lead Valdosta State to the Division II national title game this season before heading to McNeese.

He is a disciple of Hal Mumme and Mike Leach, both of whom throw the ball all over the field in just about any situation. But Goff doesn’t strictly throw the football.

Last season three of his Blazers ran for more than 1,000 yards while the quarterbacks threw for more than 3,000. That is high-powered balance.

“If the defense drops eight we will run the football,” Goff explained. “If they load the box then we will throw the ball down the field.

“You have to have a good running game at some point. You can’t do just one thing.”

The Blazers finished third nationally in total offense on the D-II level, averaging 522 yards a game and scoring at a 38.9 clip.

That’s a lot of cannon fire.

Williams was recruited by Goff to VSU and committed to the Blazers. He flipped and went to McNeese. Now he gets to play for Goff in his offense.

“I think players will like it,” Goff said. “We get a lot of people involved.”

When it comes to running the offense, Goff is in charge.

“I will be the offensive coordinator,” he said. “I will run the offense and call the plays. I will bring some guys in with me who will help me do that. They will be familiar with what we do.”

McNeese officials said they hoping that a modern offense can lead Cowboys back to the playoffs.

And they are willing to fire the cannon as much as possible to highlight the point.

Jim Gazzolo column: Cowboys up the ante to find…