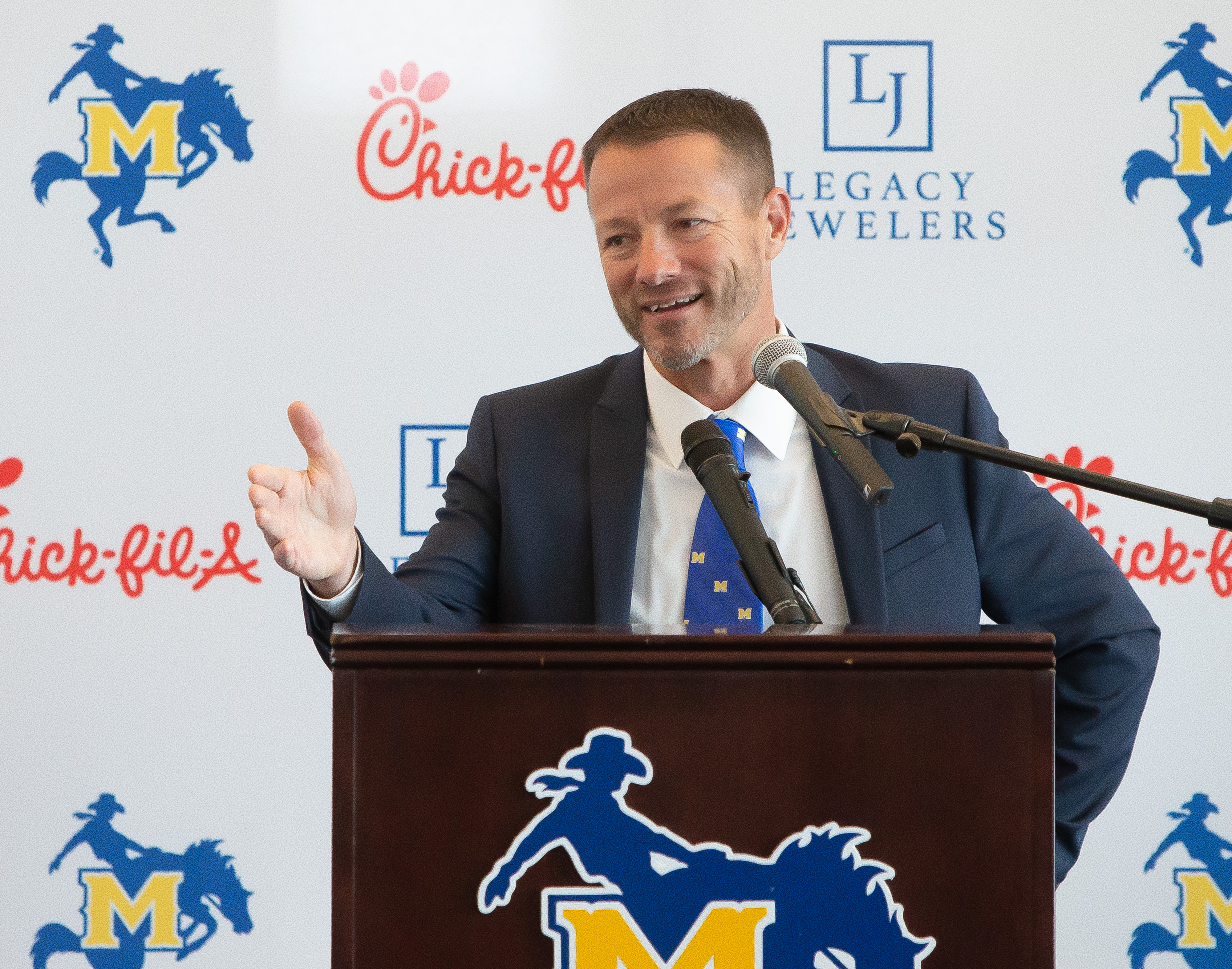 Forty hours earlier, Gary Goff was suffering through one of the longest nights of his career.

Monday was one of his all-time highs.

Before a crowd of McNeese State fans, Goff was officially introduced as the 18th head football coach in Cowboy history.

That came after Goff’s Valdosta State team suffered a 58-17 loss in the Division II national title game Saturday night at the hands of Ferris State.

Goff looked every bit the part, a perfect fit for McNeese, right down to the cowboy boots he wore with his suit.

“He is going to be great in the community, and that is important,” said McNeese Athletic Director Heath Schroyer. “We wanted somebody who is going to be a part of Southwest Louisiana.”

Goff said he is ready for that.

“We have always embraced where we live, the entire family,” he said. “We will need the community to be a part of us to win.”

In 10 seasons as a head coach, Goff has recorded a 60-53 record, starting with eight years at Tiffin College in Ohio, where he took a program from winless to 9-2 and ranked 15th in the country. He was 22-3 at his alma mater Valdosta in two seasons.

Goff, 48, replaces Frank Wilson, who left after two seasons for LSU as an associate head coach on Dec. 7. Wilson’s teams posted a 7-11 record.

“He is what the program needs right now,” said McNeese President Dr. Daryl Burckel. “He is a leader who has won at two completely different programs. He is a proven winner.”

Goff is an offensive guy who is going to run a fast-paced attack with the goal of putting pressure on opposing defenses.

“We want to be exciting and score points,” Goff said. “We want to fire that cannon a lot.”

Goff said he would meet with players through zoom and in person when possible in hopes of keeping them on board.

“I’m going to tell them that I’m not against them, that we are in this together,” said Goff.

Some of the players who were in attendance seemed more than ready to give their new coach a chance.

“I’m excited for sure,” said running back Carlo Williams, who originally committed to Goff while at Valdosta State only to change and flip to McNeese.

“I know him very well. He’s going to be a fun guy to play for. I think the players are willing to see what he offers.”

Freshman quarterback Dillon Simon said the players he talked to are ready for the fresh start.

“I think he is what we need for this team,” said Simon, who played high school at College Prep in Lake Charles.

“He is going to bring an exciting offense to us. The guys who are staying they want a chance to finish here what has been started.”

McNeese definitely needs stability. Goff is the fifth head coach in the program since the start of the 2015 season. None of the previous three made the playoffs. Goff said he will talk to the current Cowboy coaches starting today but will also bring in some of his own staff from VSU.

“I’m going to do the best I can,” Goff said. “If we are winning a lot of games, everybody is going to be happy. If we don’t win, I’m going to get fired. That’s the profession.

“We are here because McNeese has a deep history as an elite program. We want to be a part of that.”

Goff will get a chance to bring McNeese back to that status starting now.