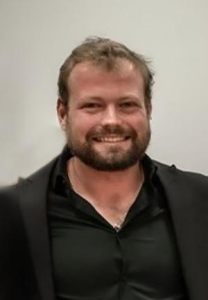 Kade was a life-long resident of Moss Bluff. He was a graduate of Sam Houston High School, where he played football. After graduation, Kade attended, earned his Bachelor’s degree and was just a few hours short of earning his Master’s degree from Spring Hill College in Mobile, Ala. on an academic scholarship.

Kade enjoyed traveling and Personal Training. His journey with personal training began when he was in high school sports and quickly became a part of him. This career helped many people through the years attain their fitness goals. Most recently, he joined Macros, a national personal fitness company. At the time he had joined, he was the youngest member of their program and currently was working with over 100 individuals to help meet their goals.

Memorials made be made in his memory to the Alzheimer’s Association at https//act.alz.org.