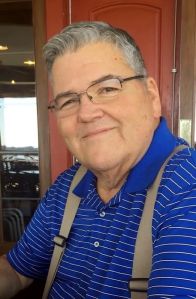 Terry Gerard Jenkins, age 73, was carried by angels to his Heavenly home on Dec. 12, 2021.  Terry was the son of Gerard Jenkins and Axie Juneau Jenkins and was born in Alexandria, La. on June 14, 1948.  The family later moved to Lake Charles, La.  Soon after Terry’s marriage to Peggy Sue Porter Jenkins on July 11, 1970, they moved to Westlake, La., and spent their 52 years of marriage there until his death.  He was of the Baptist faith and attended First Baptist Church in Westlake, La.

Terry was employed by Gordon’s Jeweler’s in the Prien Lake Mall for 18 years and later worked for Radford Buick of Lake Charles and the Calcasieu Juvenile Detention Center.  He was a member of the Masonic Lodge #443 of Westlake and also the Habibi Shriner’s Club.  Terry was a friend to all and was a dedicated and loving husband, father, and a wonderful “Papa” to his four grandsons whom he loved dearly.

Terry was a “family man” and loved by all who knew him. Survivors include his loving wife of 52 years, Peggy Sue Porter Jenkins of Westlake; one son, David Jenkins and daughter-in-law Amanda of Lumberton, Texas; and one daughter, Amy Jenkins Mathis and son-in-law Allen Mathis of Beaumont, Texas.  His four grandsons include Evan and Graham Jenkins, and Cohen and Brody Mathis.  Terry is also survived by one sister, Lynda Jenkins Rantovich and her husband Rick Rantovich of Foley, Ala.; his sister-in-law, Debra Bourque and her husband and his best friend, Michael Bourque of Moss Bluff, La. and nephew, Collin Bourque; and nieces, Kaycee Bourque, Shelly Caldwell, and Charlene Taylor.  He is proceeded in death by his parents, Gerard and Axie Jenkins; and his sister, Carol Cochran and her son, Jamie of Houston, Texas.

Fond memories and expressions of sympathy may be shared at www.hixsonfuneralhomes.com for the Jenkins family.