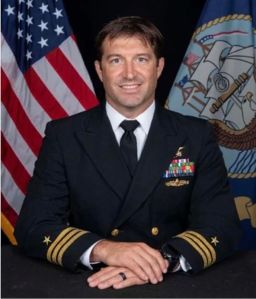 Commander Brian Michael Bourgeois, United States Navy, passed away on Dec. 7, 2021 after succumbing to injuries sustained during a training exercise in Norfolk, Va. At the time of his death, he was serving as the Commanding Officer of SEAL Team EIGHT.

Born in Lake Charles, La., Brian was a 1997 graduate of James E. Taylor High School in Katy, Texas. As a proud Cajun and avid outdoorsman, Brian grew up hunting and fishing with his friends and family and was a stand-out athlete on the football and baseball teams. His desire to serve, passion to lead, and determination drove his appointment to the United States Naval Academy. While at USNA, Brian was a four year member of the varsity football team where he left an undeniable legacy of friendship, perseverance, and commitment.

Upon graduation and commissioning in 2001, Brian was selected as a Surface Warfare Officer. After three years and multiple attempts, he was chosen to attend BUD/s and graduated with class 253.  He went on to earn his master’s degree in Defense Analysis from the Naval Postgraduate School and received the Pat Tillman Leadership Award for his class.

Commander Bourgeois was the special combination of grit and determination coupled with a laid-back, easy going personality. A leader of action, “Booj” showed care and concern for those with whom he served and was endlessly present to listen and provide help when needed. He defaulted to a mindset of service to others and engaged meaningfully within the community. Never one to miss the opportunity for a good time, Brian was often the last to leave a party after socializing with everyone in the room.

Brian loved large; nothing brought him more pride and joy than his wife, children, and dogs. He spent every possible moment pouring love and attention into his children. Whether it was cheering at soccer, baseball, volleyball tournaments or helping with homework, he remained a constant source of strength in their lives and was determined to be a regular presence despite the high operational tempo of his profession. Brian and Megan recently celebrated 20 years of marriage, and she truly was the love of his life. They shared every adventure together and created a beautiful family that brings endless love, happiness and instant camaraderie to all who are lucky enough to know them. Brian was immensely proud of his wife and children and never missed an opportunity to talk about them.

Brian will be welcomed into Heaven by his maternal grandparents, Mickey and Sammie Colletta; his Godmother, Karen Rosfeld; and his father-in-law, John Hafner.

Services will be held at Joint Expeditionary Base-Little Creek on Monday, Dec. 13, 2021 at 11 a.m. Intimate burial will follow at a later date at the United States Naval Academy Cemetery in Annapolis, Mld.