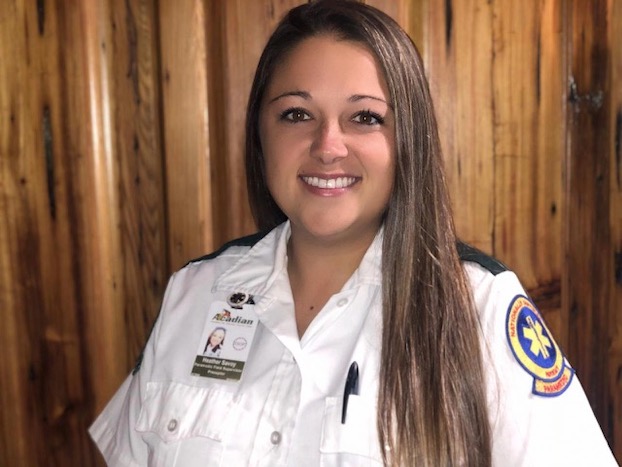 Crowley-native Heather Savoy has nearly seen it all in her 11 years with Acadian Ambulance. Having worked on the medical front lines during a pandemic and a devastating hurricane season, she has been through experiences that many others may never see.

She has the unique experience of working on additional ambulance units sent to New Orleans at the beginning of the pandemic and then helping familiar faces in Lake Charles following the impact of Hurricane Laura. Savoy said that she has been left with memories to last a lifetime, but that she remains completely certain there is no other job she would rather be doing.

“I truly feel EMS is a calling and not everyone can do it. I learned quickly I was made for it and this was my calling. Every day is a different day and you never come to work knowing what to expect,” she said.

Savoy attributes her career as a paramedic to a childhood of watching her firefighter father helping others. As she grew up, her father would tell her his work stories from the Lake Charles Fire Department and from his shifts as a reserve deputy with the Calcasieu Parish Sheriff’s Office, and they would fill her with her own desire to help others.

“There were times I can remember growing up when we would pass a wreck and he would stop and give aid. His want and drive to help others in their time of need inspired me to do the same,” Savoy stated.

She initially set out to become a registered nurse and began taking courses at McNeese State University to reach that goal, but after two years of school something just didn’t feel right. When she decided to sit out a semester, her dad approached her with the idea of becoming an Emergency Medical Technician (EMT). She decided to give it a try.

“Well needless to say, I went through EMT class and never looked back. EMS is now my lifetime career,” she said.

Savoy became an EMT in 2008 and went on to become a Nationally Registered Paramedic. From there she focused her training to become a Critical Care Paramedic, and in 2018, she was promoted to Paramedic Supervisor over the SWLA area.

Her expertise would become a great asset in early 2020. Before Lake Charles began to see a local rise in Covid-19 cases, Savoy was deployed on a “strike unit” to New Orleans, assisting as an additional ambulance provided by Acadian to areas with an overwhelming need and not enough units of their own in the area to handle that influx of calls.

“It opened my eyes to what this pandemic really was. I transported so many sick people in my time there, some that never got to return home. It was an experience I will never forget,” Savoy stated.

As the city of New Orleans shut down amid the ever rising case numbers, Savoy was able to return to Lake Charles just as the city began seeing its own wave of cases.

“Hospitals were full, families couldn’t visit their loved ones, people in the nursing home had to visit family through a glass window, and medical staff were run down. It was a tough and sad time,” she stated.

Then, as if the pandemic was not enough, Hurricane Laura struck in August.

As a recently appointed Designated Regional Coordinator for the area, Savoy was responsible for coordinating efforts for evacuation as Laura approached, and then coordinating efforts again in the wreckage she left behind. Savoy was working with officials from the Office of Emergency Preparedness and other local leaders all within days of becoming a DRC, and in the first hurricane she had ever ridden out.

“I was ‘tested by fire’ as my team likes to say,” she stated.

Savoy and her team made a makeshift command station deep inside a building in downtown Lake Charles as Laura bashed her way through the area, planning and preparing to spring into action at the first available moment. Following the storm, Savoy switched roles to become the Asset Manager for all of the additional ambulances sent to Lake Charles to assist with rescue and evacuation operations.

“I will say, that was 48 hours I will remember very well the rest of my life. At one time we had 50 extra state ambulances and 50 federal units. It definitely made me stronger and gave me so much knowledge for disasters to come,” Savoy stated.

As things settled down, Savoy was able to return to her unit a month after Laura’s landfall.

As life has slowly returned to a new sense of “normal” she said she looks back on her trials and experiences with amazement sometimes, but never with doubt.

“This job, though at times it can be tough, there is nothing else I would rather be doing,” she said.