A mind for design: Local man receives patent for invention 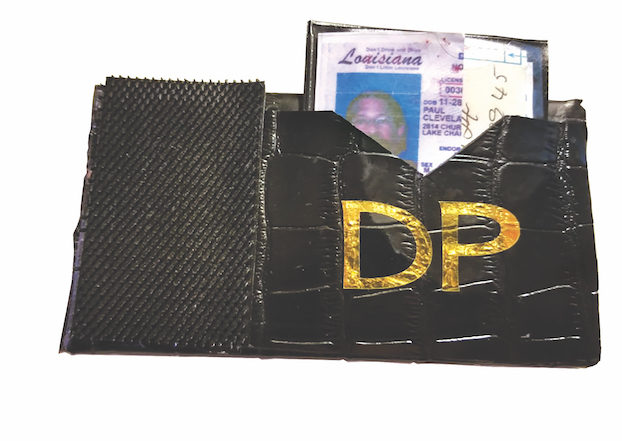 Cleveland “Dickey” Paul has a mind for design. His latest idea is simple, yet could be life-saving. His invention keeps license, insurance and registration handy and attached to the car’s visor. It is patented, in production and will soon be available at local retailers.

“Police are trained to react to certain situations,” Paul said. “When he walks up and you reach for your glovebox — a majority of people do that — it makes for a tense situation. He assumes a posture, hand near his gun, because he doesn’t know what’s coming next, especially if he can’t see your hands. He has the right to shoot you, if he feels you are putting his life in danger.”

Paul began to consider the problem.

“I thought there must be a better way,” he said.

He began work on a prototype, a plastic sleeve for documents attached to the car’s visor. He asked for feedback. He visited with a friend in law enforcement, as well as making contacts with all local law enforcement, state, parish and municipal. He visited a New York City conference for inventors before the pandemic that was headed up by Kevin Harrington, the entrepreneur once on the TV series Shark Tank.

“From the time the officer asks to see your license, insurance and registration, it takes six seconds,” Paul said, “and he can see your hands the whole time.”

For further direction, he consulted a Louisiana Development Team in Shreveport.

“It wasn’t free,” he said. “It is very costly to bring a product to market. The total I’ve spent with the patent and everything else is close to $20 grand. It’s been a struggle.”

On the up side, he sold the idea to Patents to Retail. He was told that when this company goes to Washington, D.C., to look over patents, only three to five ideas are chosen, ideas that will work. Ideas that will make money. Plus, Paul will get 10 percent of profits after this company picks up the tab for manufacturing, marketing and distribution DocUcell, the name of Paul’s design. Based on projections, Paul will do very nicely.

“If there is one thing I’ve learned through the years and that is if you want something you have to ask for it. If you don’t ask, you don’t know,” he said. “I went up there and begged for two more percent and got it.”

Paul is 75, and he’s lived in Lake Charles for over 70 years. He is an inspiration to all who want to see an idea go from prototype to “available in a store near you,” and especially to seniors.

Another reason for his success is a solid work ethic. He was the first of two graduates from a commercial art class offered in Lake Charles. He was working at Boeing and had just bought a house when the plant closed. After being interviewed by 21-year-olds, he decided to launch a sign business — not comforting words to a wife who would have rather had a steady paycheck to depend on, he said.

The riverboats came to town and as a part of their agreement with the state, a certain percentage of vendors had to be minority owned.

When his home was paid for, he dissolved the company and started buying and selling real estate. He apprenticed at two sign shops.

“All my life, if I saw an opportunity to make money, I hustled,” he said. “I’d buy a car back in the day for $100, fix it, sell and make a good profit. I am not waiting for something to happen. Opportunities are blessings only if you act.”

In addition to being creative, a risk-taker and a hard worker, inventions run in Paul’s family. It’s in his genes.

“My great uncle had a patent in Washington, D.C., that I discovered while I was doing all this research,” he said. “If you’re driving your car and have a flat, his patent would have made it possible to jack up the car to put the new tire on without leaving the car. The jack was part of the car’s framework. It never caught on. But I thought, if he can get something patented, I can do it, and I’m always looking for the next great thing.”

The DocUcell should be available in the spring, according to Paul. The price will be around $20 to $25, most likely in stores that carry auto accessories and possibly in Bed, Bath and Beyond.

Shop local this season with the #westcalwishlist2021