A winless quarterfinal round brought a muted end to football season in the area Friday.

While the postseason did not feature the dramatics of last year, when Kinder and Grand Lake made runs to the championship game and Lake Charles College Prep just missed out on a trip to Natchitoches, the high points of the year should not be taken for granted.

First of all, we actually played the vast majority of games on the schedule, despite the lingering pandemic. Barbe, Elton, LaGrange, Sam Houston and Washington-Marion all returned to the field after sitting out last season. The Charging Indians managed a winning season and may have been a play away from earning a postseason berth, losing its regular season finale on a Rayne touchdown as time expired.

District 4-3A produced a pair of resurgent seasons with Westlake making the huge leap from a winless season to eight wins, including one in the playoffs. The Rams even hung with top seed Sterlington for the first half of its second round game. Quarterback Jamaal Guillory was one of the most entertaining players in the area, using his speed and elusiveness to confound defenses all season.

Iowa had the longest undefeated run to start the regular season, winning its first eight games behind the big-play ability of Curtis Deville and a tough defense led by linebackers Ross Dennison and Jesse Martinez.

The Jackets streak ended in one of the most memorable games of the year, a 27-26 loss to Lake Charles College Prep in a Week 9 game that decided the district title. Ineligible for the playoffs due to LHSAA sanctions, the game was Prep’s Super Bowl and the Blazers rose to the occasion in the narrow road win.

Rosepine had its best season in program history, going 9-1 in the regular season then reaching the quarterfinal round of the playoffs for the first time. That feat was accomplished in dramatic fashion, with star quarterback Ethan Frey capping off a five-TD performance against Red River by running in the winning-two point conversion in double overtime.

District 4-1A had another banner year with both Basile and Grand Lake reaching the quarterfinals, and Oberlin losing a one-score game to Grand Lake in the second round. For Grand Lake, another good season solidified the program as an emerging power. For Basile, it continues a remarkable run of consistent success that has seen the Bearcats reach the quarterfinals 8 of the past 11 seasons.

There’s plenty to look forward to next season. Barbe will have Levi and QB Will McClain back looking tostart another streak of reaching the postseason. Sulphur will hope to build on a playoff appearance, Sam Houston on the emergence of freshman QB Gavin Stout.

In Class 4A, W-M and LaGrange will have returning stars at running back in Derrick Paul and Keshaun Doucet. Crosby is back at DeRidder and Leesville will look to repeat as a district champion. Assuming current redistricting plans hold, those four teams will be competing against each other in a new district of primarily local teams.

Redistricting will likely make the local 3A district bigger and better with Kinder joining all-local 4-3A. A young Yellow Jackets squad struggled to start the season but made a second half surge that included a road win in the first round of the playoffs. Kinder has had entertaining series with Iowa, LCCP and Jennings in recent years and have played a high-quality nondistrict schedule. They’ll be able to punch above their weight in the new classification, though the district should be strong again next year with Prep, Westlake and St. Louis each returning several standouts to build around.

In the lower classes, Rosepine will lose Frey but return standout running back Grant Ducote. Welsh had a turnaround season this year and will bring back quarterback Gabe Gillet, who starred before suffering a season-ending leg injury.

Grand Lake returns most of its offensive skill position players and Oberlin loses just four seniors and should return to the district title race. 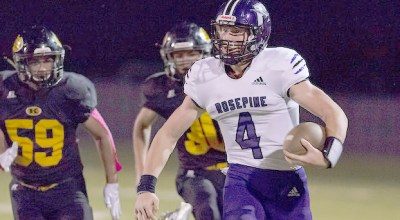