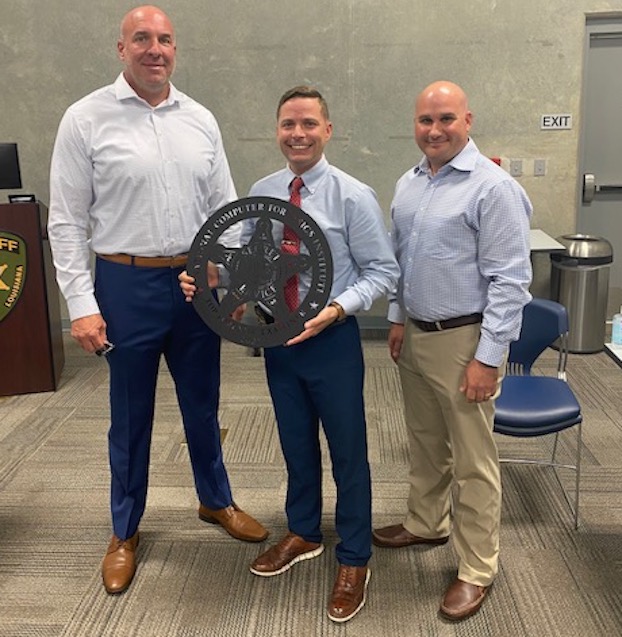 A Calcasieu Parish Sheriff’s Office investigator received high honors recently when he was recognized as one of the top forensic examiners in the nation.

Det. Jerod Abshire was ranked 23rd out of about 2,800 forensic examiners from across the U.S. by the National Computer Forensic Institute (NCFI) earlier this month.

The NCFI ranked the forensics experts after they completed 468 forensic exams and more than 42 terabytes of data this fiscal year. Officials said the exams ranged from cellphone, vehicle and computer forensics, along with DVR systems.

The NCFI is run by the United States Secret Service and the Alabama Office of Prosecution Services, and is a federally funded training center dedicated to instructing state and local officials in digital evidence and cyber-crime investigations. It was opened in 2008 with a mandate to provide state and local law enforcement, and legal and judicial professionals, a free and comprehensive education on current cyber-crime trends, investigative methods, and prosecutorial and judicial challenges.

Abshire began his career with CPSO in 2011 as a correctional officer. He was soon selected for patrol in January of 2012 where he made numerous arrests and completed reports ranging from burglary and theft to narcotics and domestic incidents.

Abshire was selected for the Investigations team in 2016, and was assigned to the violent crimes unit. At this unit, Abshire said he obtained his skills with interviews and interrogations, and in investigating homicides and felony crimes. He assisted in seven homicide cases and was the lead investigator in three homicides, and he began to learn how to complete forensic examinations.

In June 2018, Abshire was selected for a position with CPSO’s Digital Forensics Unit where he received certification accredited by the Federal Law Enforcement Training Board.

His skills and passion were recognized when he was selected to become a member of the U.S. Secret Service Task Force and was invited to attend the National Computer Forensics Institute.

“We are fortunate to have such a talented, hard-working young man that works for us,” Mancuso said.