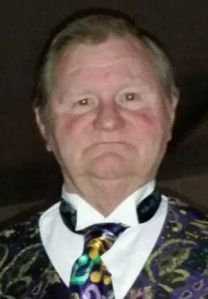 In grade school, his father accepted a position relocating them to Ulysses, Kan. His high school years was a time of great conflict, the second Indochina War had been raging since 1954. When the United States entered the Vietnam War in 1965, at the age of 13 he felt a calling to serve his country. Upon turning 18 he enlisted into the United States Army, upon completion of basic training he was deployed to serve in the Vietnam War as a Crew Chief and door gunner. During his 11-month deployment, he was a sole survivor of three helicopter crashes. For his heroic actions during his deployment, he received three Purple Heart Medals, National Defense Service Medal, Armed Forces Expeditionary Medal, Vietnam Service Medal, Air Medal, Vietnam Campaign Medal, and Aircraft Crewman’s Badge. Upon the completion of his tour, he returned to Fort Bragg, N.C. to finish out his enlistment, receiving an honorable discharge in April 1972.

He was a man of simple means, he enjoyed spending time with his family and friends. He enjoyed cooking and hosting social gatherings. He was employed as a heavy equipment mechanic working with many companies over the years, most recently with Daly Equipment where he retired from in 2001.

He was a member of The Buccaneers of Lake Charles serving as their Social Chairman and also of Krewe de la Maison de Calcasieu where he was on court as Duke in 2005 and King of Voodoo in 2017. He often would cook and BBQ for his fellow members, even participating in a Contraband Days cook-off and placing in an Etouffee contest.

The calm and peaceful waters of the Calcasieu River gave him many years of tranquility, he often would go alone or with his family to cruise and enjoy the serene landscape. Together they also would travel, anywhere from Florida to the Dominican Republic to enjoy scuba diving, snorkeling, or just to take it easy on the balcony of a cruise liner.

The family will welcome friends at Johnson Funeral Home of Moss Bluff on Saturday, Nov. 27, 2021 beginning at 5 p.m. to 8 p.m. Visitation will resume Sunday, Nov. 28 at 10 a.m. until time of service. A funeral led by Pastor Jay Lawson will begin at 1 p.m. with burial to follow at Bertrand Cemetery in Hathaway.

The family invites you to donate to Vietnam Veterans of America or The Agent Orange Victims & Widows Support Network, Inc. in honor of the man they consider their biggest hero.