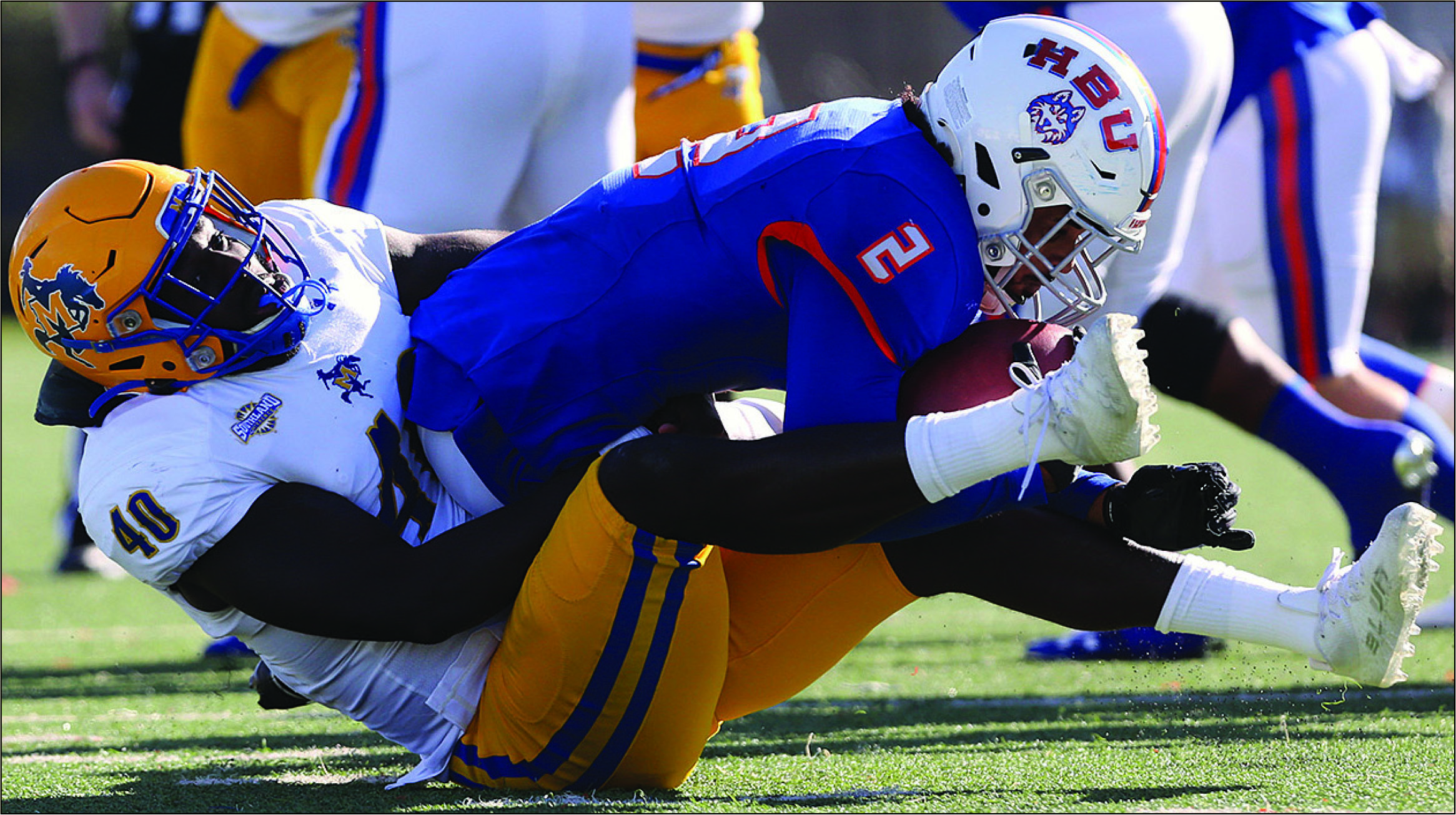 All-American defensive end Isaiah Chambers made an impact in his brief 18-game career at McNeese State. Chambers recorded an average of one sack per game and was a two-time Southland Conference Defensive Player of the Year. (Leighton Chamblee / Special to the American Press)

McNeese State defensive end Isaiah Chambers joined an elite group when he became the eighth player in Southland Conference history to be named the league’s defensive player of the year for a second time.

The graduate student from Houston was one of 10 McNeese players named to the all-SLC football team.

Chambers is the second Cowboy to be named the league’s top defensive player more than once (Terry Irving, 1992 and ’93) and gives the Cowboys their fourth consceutive conference top defensive award (B.J. Blunt, 2018; Chris Livings, 2019; Chambers 2020 and ’21) and the 16th selection overall.

Southeastern Louisiana led the way with 14 honorees, followed by Incarnate Word and Nicholls State each with 13. Houston Baptist accounted for four spots, and Northwestern State rounded out the teams with two selections.

SLU quarterback Cole Kelley was the Player of the Year. The reigning Walter Payton Award winner and a finalist for this year’s honor, Kelley was the Football Championship Subdivision leader in completion percentage (74.2), efficiency (179.5), passing yards per game (398.4), points responsible for per game (29.6) and total offense per game (438.5). He also ranks second in completions per game (30.82) and yards per attempt (9.59) and third in passing touchdowns (38) and rushing touchdowns (16).

The offensive player of the year was Incarnate Word’s Cameron Ward. Ward ranked among the top-10 FCS quarterbacks in completions per game (27.82), passing touchdowns (38), passing yards per game (349), points responsible for per game (20.7) and total offense (355.1). In 17 career starts, he has surpassed 300 yards in 15 of them with UIW coming out on top in all but two games in which he failed to reach 300 yards.

The coach of the year was UIW’s Eric Morris. A finalist for the Eddie Robinson Award, Morris led the Cardinals to their first outright conference championship and FCS playoff automatic qualifier in program history. UIW (9-2) ranked fourth in the country in scoring offense (39.6) and sixth in total offense (484.8).

Chambers, who was named as a finalist for the Stats Perform FCS Buck Buchanan Award for a second consecutive season, led the SLC with 10.5 sacks and 15.5 tackles for a loss this season. It was the second consecutive season to lead the league in both categories, ending his career by becoming the first player to average a sack a game with 18 in 18 career games. He recorded all 10.5 of his sacks on the season in the final eight games of the season.

Williams ended the season with 102 total tackles to become the first Cowboy to top the century mark since Blunt’s 102 in 2018. The junior from Carencro recorded 10 or more tackles in seven games, including a career-high 17 against Southeastern Louisiana.