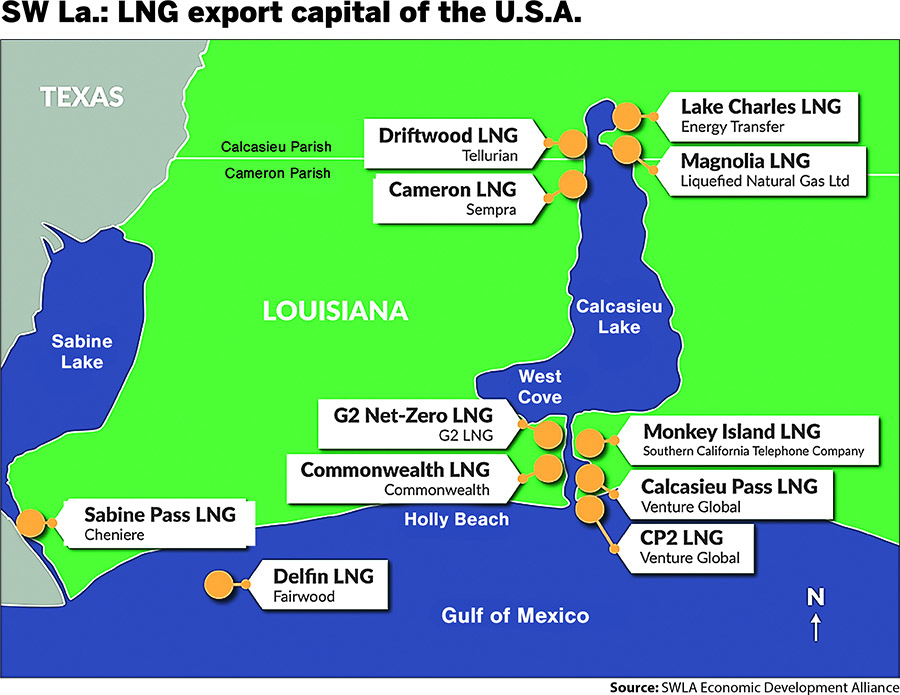 The demand for LNG is expected to rise 25 to 50 percent by 2030. Southwest Louisiana will be a major supplier, and in particular, Cameron Parish. Here’s an overview of what’s happening and what’s set to unfold. It’s not just locals focused on what’s happening in this area, but the world.

A Southwest Louisiana Economic Development Alliance Map on display at the summit and exhibition showed where present and potential projects are located. Most are in Cameron Parish.

Cheniere is a United States LNG pioneer. It’s the largest producer of LNG in the United States and second largest LNG operator in the world. The Sabine Pass facility, located near the Texas-Louisiana line in Johnson Bayou, is a full-service LNG provider.

“Natural gas is purchased, delivered via pipeline to the facility, liquefied, then loaded onto LNG carriers to be exported around the world,” said Amy Miller, Cheniere spokesperson. “This facility began exporting in 2016 and has since produced and exported more than 1,400 cargos to over 35 countries.”

Liquifying natural gas involves cooling it down to a liquid form. The process means it takes up 1/600th of the volume and it makes it easier and safer to transport.

Five of the six Cheniere/Sabine Pass trains, which are the units that liquify the gas, are operational. Train 6 is expected to be completed by the first quarter of 2022, according to Miller.

“Cheniere is also constructing a third berth at the facility,” Miller said. “We expect that to be completed in 2023.”

The site has approximately 500 employees and 500 construction workers.

The American Press contacted the second export facility currently in operation in Cameron Parish, Sempra/ CameronLNG, for an update and the calls were not returned.

Venture Global’s $4.5 billion Calcasieu Pass LNG export facility is being built on a 1,000-acre site at the intersection of the Calcasieu Ship Channel and the Gulf of Mexico. Commercial operations are slated to begin in the fall of 2022, with the facility producing 10 million tons of LNG per year.

UNIPEC, a subsidiary of Sinopec, a Chinese Petroleum & Chemical Corporation agreed to purchase 3.5 million tons of LNG from Calcasieu Pass over a less than 20- year period. In a Nov. 5 American Press article, John Guidroz quoted Venture Global CEO as saying this and the deal signed with the Plaquemines plant is the “largest LNG import deal ever signed by a U.S. and Chinese company.”

Amid the recent surge of momentum for LNG, Commonwealth LNG continues to make good progress on development of an 8.4 million tons per year LNG export terminal at the mouth of the Calcasieu River, according to Lyle Hanna, Commonwealth spokesperson.

“Based on a federal approval schedule targeted for late 2022, Commonwealth anticipates a final investment decision in the first quarter of 2023,” said Hanna in an email. “With its modular approach helping to fast-track to construction, the facility will be operational by the second quarter of 2026, coinciding with the anticipated growth in LNG demand forecasted for mid-decade.”

Delfin’s plans include building and operating a deepwater LNG terminal about 40 miles off the Cameron Parish Coast, according to an article earlier this year in the Cameron Pilot by Cyndi Sellers.

When Tellurian, an American company, was founded in 2016, it began the permit application process of its proposed Driftwood LNG Project with the Federal Energy Regulatory Commission, according to Heather Hohensee, government and public affairs director for the company. The project represents about a $15 billion investment and will create an estimated 6,500 construction jobs and 400 permanent jobs in Carlyss along the Calcasieu Parish ship channel.

“Tellurian is currently focusing on financing the Driftwood project in order to give Bechtel (EPC partner) notice to proceed with construction,” Hohensee said in an email to the American Press. “Tellurian is targeting to begin construction in early 2022.”

To date, the company has finalized finalized 9 mtpa of LNG sales to support the launching of the first two plants of Driftwood LNG. It has received the most significant permits required for construction and operation, including FERC authorization in April 2019. Tellurian Production is actively seeking to acquire upstream assets and is also enhancing its natural gas drilling program, Hohensee said.

“In one of the company’s significant milestones over the last year, the company completed purchase and lease of approximately 1,000 acres of real estate,” Hohensee said. “This includes its long-term lease option exercised in June 2021 with the Lake Charles Harbor and Terminal District on the 477-acre site in Sulphur.”

The plant will be located south of Burton Shipyard Rd., where Global Industries and Technip were previously located. Road improvements to help mitigate traffic congestion have already begun.

Tellurian has several representatives at the Lake Charles LNG & Gas Summit and Exhibition.

“It was a wonderful opportunity for the LNG Industry to demonstrate the key role Southwest Louisiana plays in this growing global energy industry and to continue to positively impact the regional economy,” Hohensee. “The attendee participation was truly impressive, and our team particularly appreciated being able to engage with local businesses and community leaders as well.”

“Southwest Louisiana has had a presence on the world’s energy stage for some time now,” said SWLA Economic Development Alliance VP, Business & Workforce Development R.B. Smith. “Now we’ve become the global focus for LNG. We’re becoming known for the facilities we have and the plants to come.”